Internet showers Trump in ridicule after his Mall speech turns into a rain-soaked mess: 'This has become an SNL parody' 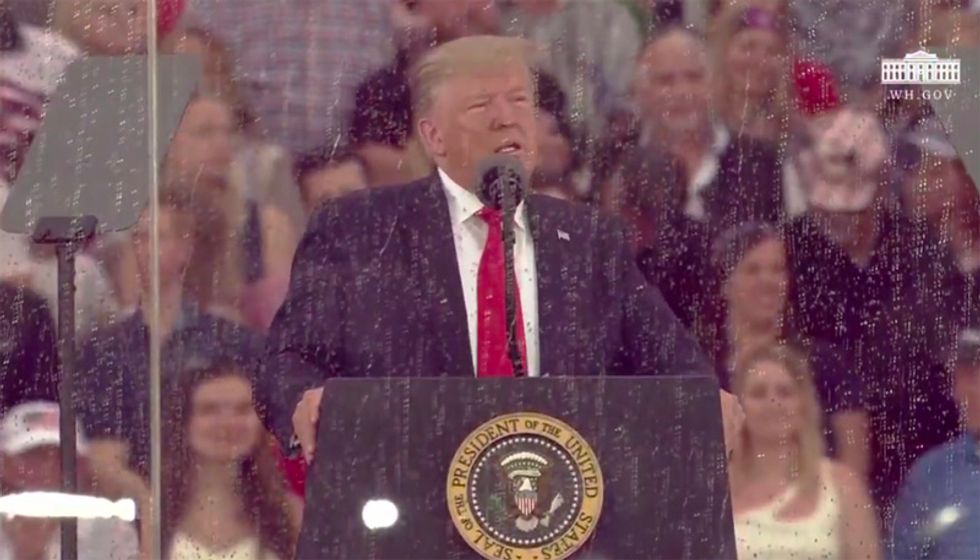 Despite the pouring rain, poor planning and crowds that left after the event was delayed, Donald Trump went forward with his "Salute to America" Fourth of July extravaganza as Twitter users reveled in what a disaster it turned into.

With the president tweeting, "Weather looking good, clearing rapidly," the show went on -- but not without observers noting how poorly everything turned out as live video showed the president speaking behind a sheet of plexiglass as water streamed down it.

Check out the responses below:

Thomas Edison. The Wright Brothers. Clara Barton. This Trump speech is just about name-checking as many people as… https://t.co/OroOh7SlD8
— Matt Fuller (@Matt Fuller) 1562280668.0

Trump has already lost the crowd at his 4th of July speech, as you can hear the crowd ask themselves, "We stood out… https://t.co/DrYD7ujgpM
— PoliticusUSA (@PoliticusUSA) 1562280317.0

Trump's speech is a shocking load of old shite, it is pissing down with rain and the whole thing appears to be a to… https://t.co/goQ08O1aii
— FashionShark (@FashionShark) 1562280354.0

Trump on 4th of July trying to read TelePrompTer speech is equated with his head bobbing back and forth. Behind a r… https://t.co/wgRu9CpdX0
— Essay More (@Essay More) 1562280169.0