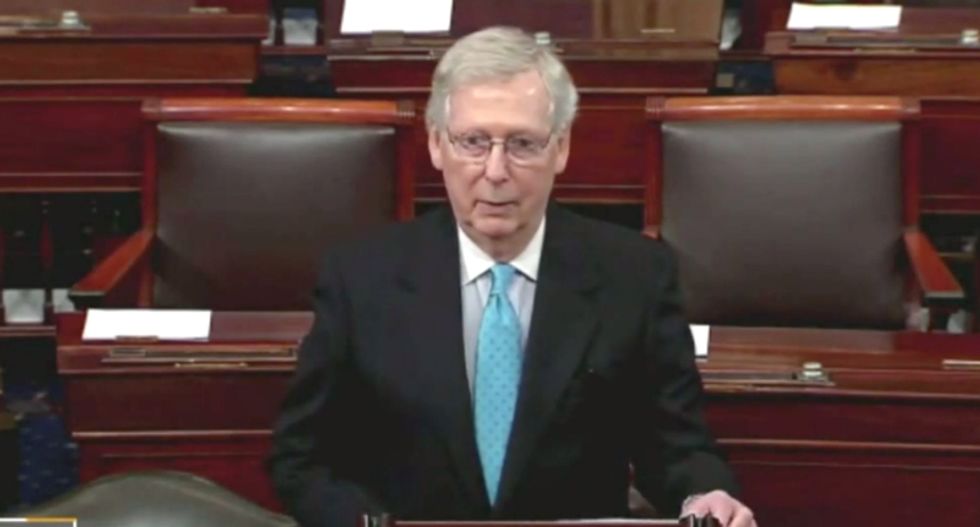 In a nearly 30-minute floor speech, Sen. Mitch McConnell (R-KY) attacked Democrats for trying to gaslight him into securing American elections. He then tried to turn it around and say former President Barack Obama was to blame.

"These pundits are lying, lying when they dismiss the work that's been done," McConnell said. "They're lying when they insist I have personal actions, which I have in fact championed and the Senate has passed."

McConnell was blasted for three days on Twitter as #MoscowMitch, questioning his patriotism for refusing to protect American elections. He alleged the actions of Democrats were a kind of "modern-day McCarthyism." It's an ironic claim given President Donald Trump alleged that Democrats are becoming a "socialist" and "communist" party.

McConnell used the resignation letter recently released by Director of National Intelligence, Dan Coats, which said he was pleased with the work he'd done to "established an election security executive to support the whole-of-government effort to address threats against our elections, reforms to the security clearance process, and improvements to our budget process."

According to McConnell, that is sufficient. He then blamed Obama for not taking threats from Russia more seriously. However, former Vice President Joe Biden said that the White House approached McConnell in 2016 when they discovered the truth about what Russia was doing. They asked him to come out with them in a bipartisan attempt to warn Americans. McConnell refused to do it.

However, McConnell "wanted no part of having a bipartisan commitment saying, essentially, 'Russia's doing this. Stop,'" Biden said.

Instead of telling Americans, McConnell's office said that he sent a letter "to the president of the National Association of State Election Directors, urging cybersecurity precautions in light of reports of attempted hacking." The letter McConnell sent made no mention of Russia, however.

But McConnell is still crying "McCarthyism."

Last week, former special counsel Robert Mueller warned that not only did Russia attack the 2016 election, they're continuing to attack the election today, regardless of the letter McConnell sent in 2016 or the DNI's hire of an "election security executive."

"They're doing it as we sit here," Mueller warned.