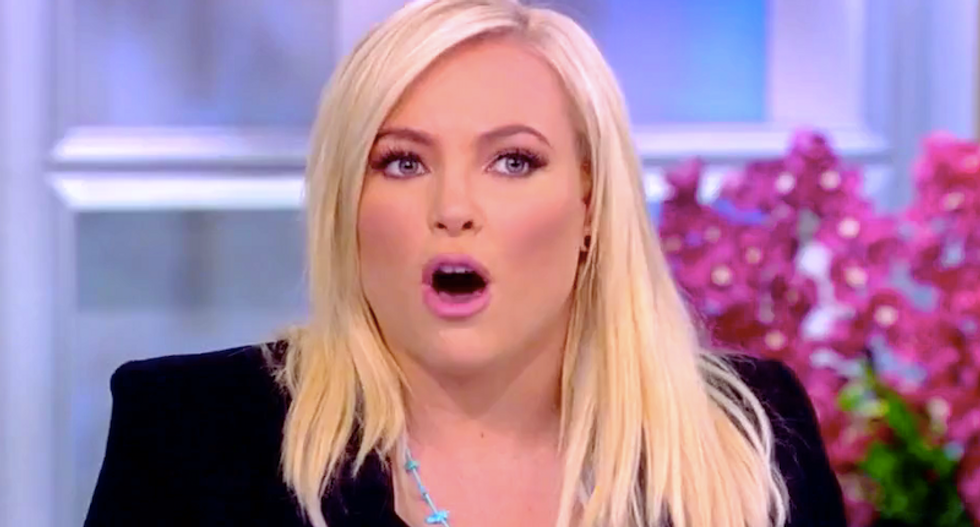 "The View" erupted into a shouting match over President Donald Trump's racist smears of Rep. Ilhan Omar (D-MN) and other Democratic congresswomen, even though all the panelists seemed to agree his remarks were abhorrent.

"This is so bad," McCain said. "It's like nothing I have ever seen, and I don't think anyone in this room has ever seen before, and if you can't beat this, this blatant racism, what does this say about your party?"

Co-host Joy Behar pushed back, saying Trump had campaign as a blatant racist in 2016 and won the Republican nomination and then Electoral College, and then McCain commented on Navarro's emotional response to Rubio's dismissal of concerns about the president's bigotry.

"Look at her -- she has real, raw emotions right now," McCain said. "Her hands are shaking. You're not the first person I've seen like this this week. A lot of people, a lot of hardcore conservatives I know are very, very, very upset."

Behar jumped in with a quick burn.

"I'm so sorry to hear that," Behar said. "Why don't they open their mouths?"

The crowd hooted and applauded, and McCain struggled to be heard.

Behar said she wasn't talking about those friends, but instead was referring to the late Sen. John McCain's friend, Sen. Lindsey Graham, or former senator Rick Santorum, but McCain called out one of her friends' name.

"I'm sorry my friend Sara in Scottsdale doesn't have the same kind of platform I do," she said.

Navarro said she didn't care what McCain's personal friends thought about Trump, and instead called on Senate Majority Leader Mitch McConnell to speak out, but McCain said rank-and-file Republicans were suffering from Trump's racism.

"If you're a normal Republican walking around the streets of New York City, like you and I are, or wherever, and you are tagged with this right now," McCain said. "It is humiliating. It's embarrassing. It's -- I don't know what to do about it anymore."

"I have said this all week," she added, "and the fact that we are tainted with this as Republicans and conservatives, yes, it's cowardice on the other side. I don't know what else I can do, other than we are calling it out as loud as we can with the platform that we have."

McCain called on Ivanka Trump, Jared Kushner and Vice President Mike Pence to challenge the president on his racism, and Navarro offered a more practical course of action for outraged Republicans.

McCain, who has said she would not even vote for family friend Joe Biden because he's a Democrat, then offered an excuse for Republican leadership standing by Trump.

"It's obviously about power," she said. "I'm sorry, this is not a complicated question. It's about political power -- as it should be."