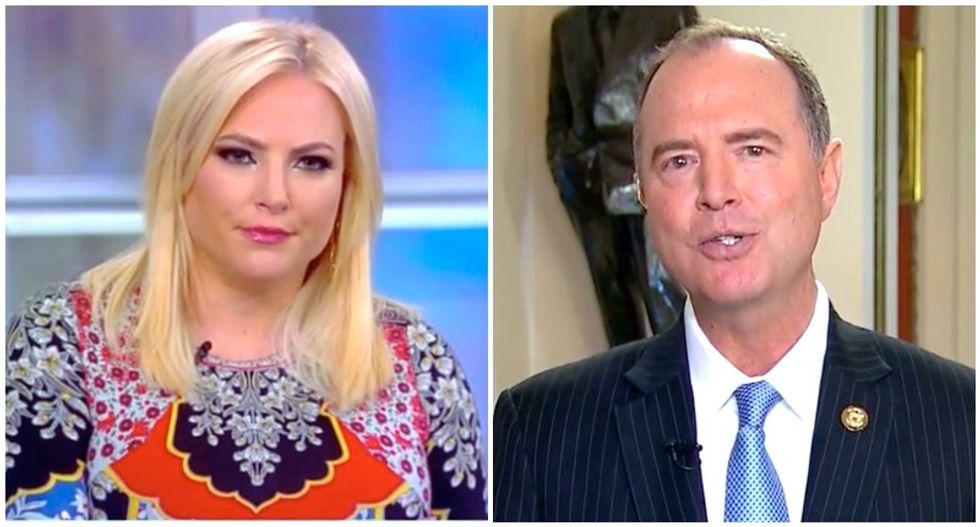 The former FBI director testified at length Wednesday before two House panels, and Schiff walked him through his findings that Russia had offered to help elect Donald Trump -- whose family members and other associates accepted that help and actively promoted emails stolen by Kremlin operatives, and then lied to cover up those efforts.

The California Democrat then patiently walked McCain through the same evidence that Mueller had confirmed was accurate during his testimony before the House Intelligence Committee that Schiff leads.

"Well, first of all, Mueller wasn't wrong," Schiff said. "He started out by saying we didn't address the issue of collusion."

"What's your evidence?" she said. "You've been saying that on TV for years."

Schiff was undeterred, and continued to lay out his case.

"I will tell you," he said, "and we have also been saying that the evidence is in plain sight, not hidden anywhere, and we went through that evidence. The Russians offered dirt on Hillary Clinton in writing and sent it to Don Jr., and Don Jr.'s response was in writing and said, as for your offer of foreign illegal help, I would love it. He accepted the offer."

"Now Bob Mueller had a different question he needed to analyze, which is, can I prove each of the elements of the crime of conspiracy beyond a reasonable doubt?" he added. "As you know, well before the Mueller report I was pointing out to the public, there is a difference between what we understand is collusion and whether you can prove all the elements of crime."

McCain interrupted again and asked whether Mueller's testimony was a win for Democrats, but Schiff didn't take the bait.

"You know, I would consider it a win for the American people that they got to hear from the person who did the investigation," he said. "They got to hear unfiltered by anybody else, what he found, you know, for the former director of the FBI, and the special counsel, to say effectively the president acted immorally, unethically, unpatriotically and likely in a criminal fashion, the American people needed to hear. If you are measuring whether this is a success in terms of whether it brings us closer to impeachment or not, that was not my object with wanting him to come in."