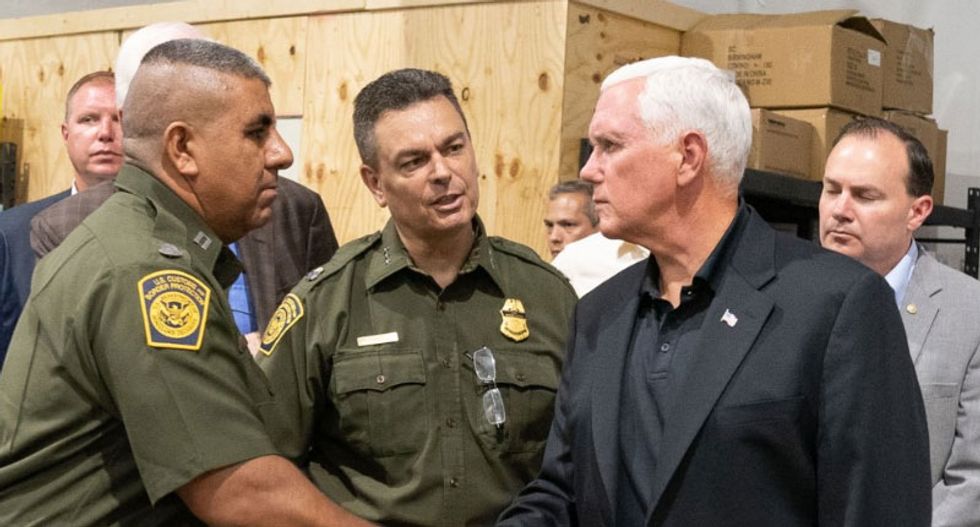 Vice President Mike Pence with guards at a detention facility.

Vice President Mike Pence's defense of his administration's detention camps was criticized so heavily on Saturday that the hashtag #FakeChristian trended nationwide on Twitter.

Pence was subjected to an overwhelming stench of urine during his visit to a Customs and Border Patrol facility in McAllen, Texas.

The public relations trip appeared to have backfired on the VP.

The hashtag #FakeChristian should apply to literally anyone supporting the GOP at this point... You’re all full of shit
— On The Screens (@On The Screens)1563041366.0

I looked up #FakeChristian in the dictionary and there was a picture of Mike Pence. Then a lightning bolt came from… https://t.co/fCUccDqsba
— Palmer Report (@Palmer Report)1563046888.0

@joncoopertweets @VP Speak up for those who cannot speak for themselves, for the rights of all who are destitute. S… https://t.co/anuPh6Xazb
— Nancy Levine (@Nancy Levine)1563057575.0

The hashtag #FakeChristian should apply to all Trump supporters at this point. You goto your safe spaces on Sunday… https://t.co/sUBJcxTWKw
— MB (@MB)1563056799.0

The look of discomfort on @VP 's face comes from the physical exertion of resisting the Holy Spirit convicting his… https://t.co/xoYZD5du6s
— Flavortown Antifa (@Flavortown Antifa)1563049786.0