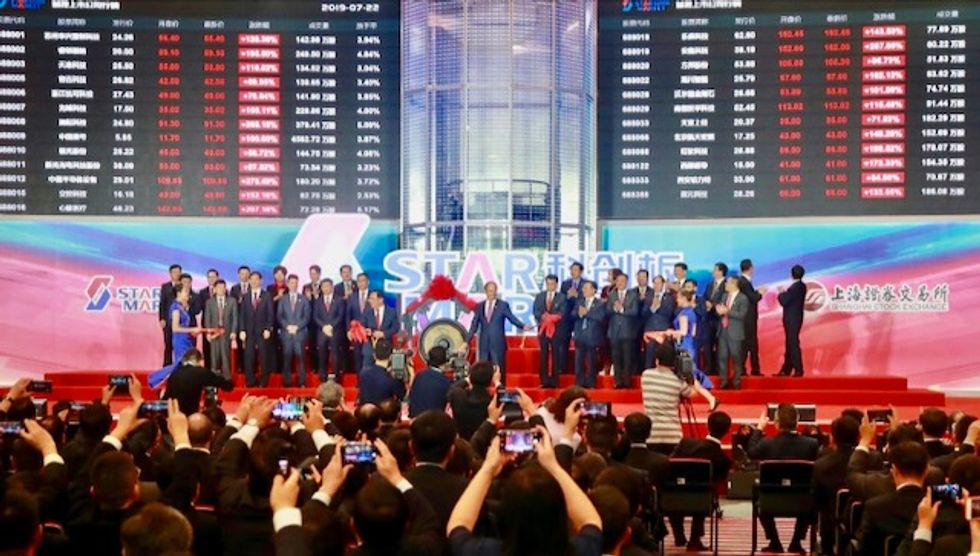 Shares on Shanghai's new Nasdaq-style technology board soared Monday, with one firm rocketing more than 500 percent, as investors rushed to grab a piece of China's latest market liberalisation in a frenzied debut.

All 25 components on the Shanghai Stock Exchange's Sci-Tech Innovation Board, or STAR Market, were driven sharply higher in a hearty initial endorsement of China's plan to use the board to help fund fast-growing tech firms and discourage them listing abroad.

The introduction of the board, for which listing and trading rules have been dramatically eased, represents one of China's most significant financial market reforms yet and a potential weapon in its growing tech rivalry with the United States.

The tech board is yet to draw any household names.

But China hopes it will eventually include listings from among the country's rich stable of tech "unicorns" -- start-ups valued at a minimum $1 billion -- which include Alibaba-linked mobile-payments pioneer Ant Financial, ride-sharing giant Didi Chuxing, and online-services platform Meituan-Dianping.

China's government envisions the board being mentioned in the same breath someday as the tech-heavy Nasdaq, encouraging firms to list at home after the likes of Alibaba and Baidu chose Wall Street.

That will take time -- the Nasdaq has more than 3,000 companies listed and is one of the world's biggest exchanges.

"I think the science and technology board will develop into a major and important sector in China's capital markets, but it will take a long time, maybe 10 years, 20 years, or even longer," said Jiang Liangqing, a fund manager at Ruisen Capital Management.

It is a leap of faith for China's volatility-averse authorities, as its stocks have been given relatively free rein.

For the first time, Chinese companies can list without a track record of past profits or restrictions on IPO pricing.

There will be no limits on price movements for the first five days of trading, after which a daily 20 percent band is imposed.

China's two main exchanges in Shanghai and Shenzhen are subject to a 10 percent band to contain volatility.

With attention on the new exchange, those markets languished Monday. Shanghai's main index was 0.57 percent lower at midday while Shenzhen's was down 0.87 percent.

The tech board was announced in November by President Xi Jinping as a battle with the United States for technological supremacy heated up.

Xi has called on China's tech leaders to become global champions, while the US has fought back in part by taking steps to clip the wings of Chinese telecom giant Huawei.

When big tech companies list overseas, the government in Beijing loses influence over their fundraising and Chinese investors cannot share in those companies' success due to restrictions on purchasing overseas-listed shares.

China realised it needed to loosen up.

"If China didn’t launch this new tech board now, it would miss the chance to transform its economic development into this 'new economy' mode," said Yang Delong, chief economist at First Seafront Fund.

But there are concerns that the new board could siphon liquidity from China's main markets, already pressured by slowing economic growth and the US trade war.

As a result, analysts believe regulators will take a measured pace in growing the tech board.

"The (main) markets are in a downturn now and if giant companies list on the tech board initially, market capital will be diverted. The market cannot bear that," said Yang.

"The new board won't drain too much from the main boards."