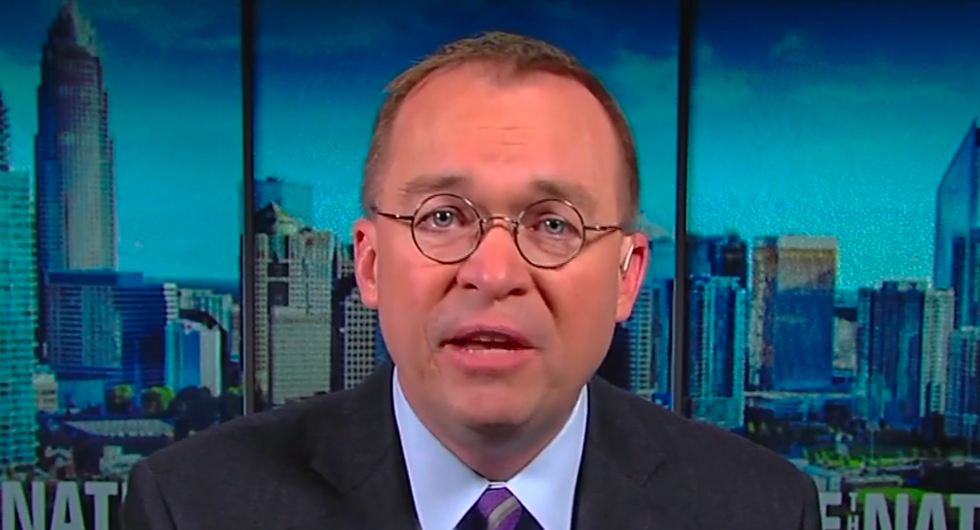 President Donald Trump doubled down on his support of Secretary Alex Acosta during an Oval Office photo-op Tuesday. Despite the administration lining up behind Acosta, the president's chief of staff, Mick Mulvaney, was privately pushing the president to show Acosta the door.

The secretary of labor isn't merely in trouble for the "sweetheart" legal deal he made with Jeffrey Epstein over prostitution instead of child molestation. He also broke the law by not telling Epstein's accusers about the plea deal so that they could protest in court during sentencing.

According to Politico, the pressure is mounting for Trump to shove Acosta out a back door and come out strong against sex trafficking and child molestation, regardless of the income of the accused.

"Mulvaney told the president on Monday that the continuing drip of damaging information surrounding the 2008 agreement Acosta struck to keep billionaire pedophile Jeffrey Epstein from a heavy jail sentence would hurt the administration, according to two people familiar with the conversation," Politico reported Tuesday evening.

Mulvaney isn't an Acosta fan, not merely because of the public accusations that are increasing Trump's bad press, but because he hasn't been strong enough in getting rid of workers' rights regulations.

This isn't the first time Trump has supported a cabinet secretary embroiled in scandal. In every instance where the official ultimately resigned, Trump initially advocated the leader first.

“Whether Mr. Acosta should resign depends on the results of the investigation that’s gone on within the Justice Department. I hope it’s a thorough investigation,” said Sen. Mitt Romney (R-UT).

“I’ve seen some good people hurt. If they did something wrong, they ought to pay the price, but until that’s conclusive that they did, I don’t think they should be lynched,” said Sen. Johnny Isakson (R-GA).