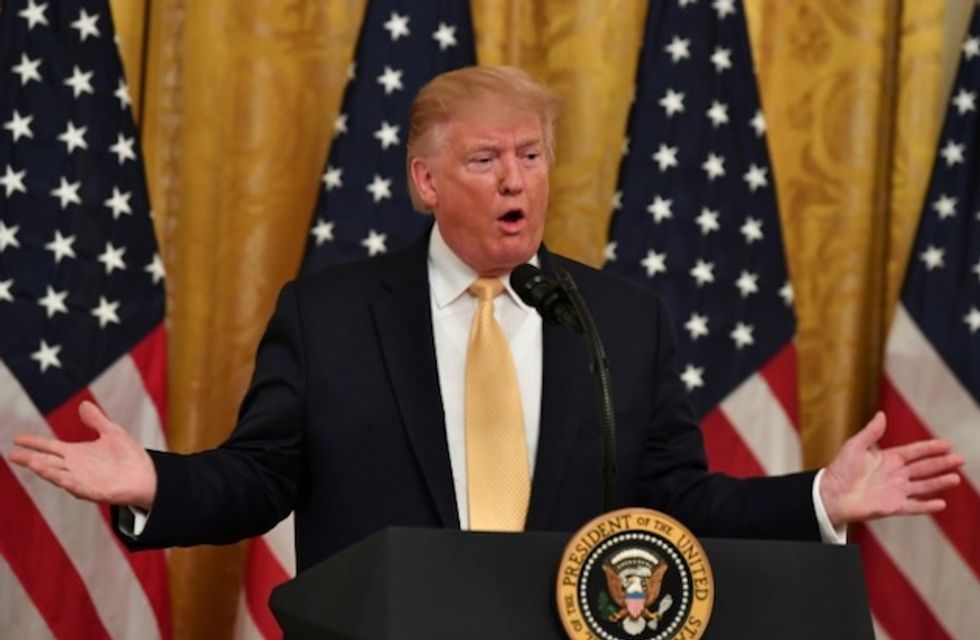 President Donald Trump ramped up his attacks on Silicon Valley giants on Thursday with a call for "regulatory and legislative solutions" to what he described as unfair treatment of conservatives by major online platforms.

At a White House social media "summit," Trump excluded internet firms from the gathering of conservative activists who have been curbed on social media.

But he said he would invite those companies in the coming weeks for "a big meeting and a real conversation" on the topic.

Speaking to his supporters, Trump repeated his argument of political bias, claiming some activists were blocked or limited on social platforms.

Trump, a frequent Twitter user who has more than 60 million followers on that service, nonetheless renewed his complaint over "terrible bias" on social media, and vowed a response.

He offered no specific proposal but said he was directing his administration "to explore all regulatory and legislative solutions to protect free speech and the free speech of all Americans."

The latest gathering has stoked fears that the White House may seek to eliminate the legal framework that protects online services from liability over harmful content posted by others but hosted on their platforms.

Digital rights activists and others warned that removing the protection -- codified as Section 230 of a 1996 law -- could undermine free speech protections and the internet ecosystem.

"The government shouldn't require -- or coerce -- intermediaries to remove constitutionally protected speech that the government cannot prohibit directly," said a letter signed by 27 civic and digital rights organizations and 50 academics.

The letter said such demands would violate the US Constitution's First Amendment on free expression.

"Also, imposing broad liability for user speech incentivizes services to err on the side of taking down speech, resulting in overbroad censorship -- or even avoid offering speech forums altogether," it added.

"Today's most popular social websites would never have taken off and the internet would look basically like cable," he added.

Trump has repeatedly claimed that firms such as Facebook, Google and Twitter -- who were not invited to the summit -- discriminate against him and his supporters, even though his own Twitter account has nearly 62 million followers.

AFP/File / NICOLAS ASFOURI, Lionel BONAVENTURE Twitter and Facebook were not invited to a White House "social media summit" where critics of Big Tech were expected to air grievances

But they also have faced pressure from governments around the world to remove abusive and hateful content as well as conspiracy theories, such as those promoted by Trump and his allies attending Thursday's White House gathering.

"Internet companies are not biased against any political ideology, and conservative voices in particular have used social media to great effect," said Michael Beckerman, president of the Internet Association, which includes Twitter, Facebook and Google.

"Internet companies depend upon their users' trust from across the political spectrum to grow and succeed."

Twitter said last month it would add warnings to tweets from officials and politicians that violate its rules -- a move potentially affecting Trump's prodigious output.

The Computer & Communications Industry Association, a trade group whose members include Facebook and Google, said the White House event "seems designed to intimidate companies to bias content in favor of whoever is calling the meeting."

"No private company should be browbeaten by the government into giving a pass to objectionable content that violates company policies," CCIA president Ed Black said in a statement.

"Social media sites may wish to allow many types of speech, but should not be required to stay neutral on hate or religious intolerance.

"If those airing grievances at this week's meeting are unsatisfied with one company's policy against objectionable content, there are plenty of competitors from which to choose."