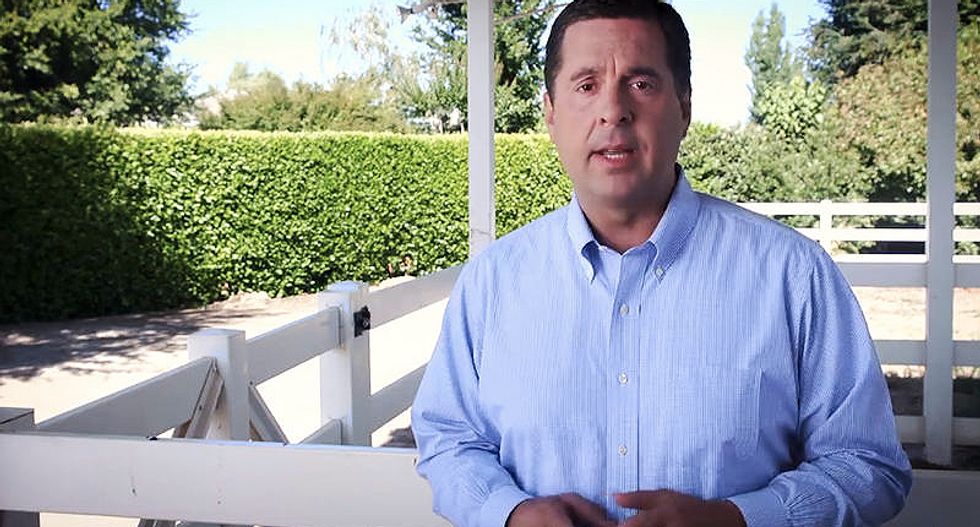 Rep. Devin Nunes (R-CA) brags about being a "farmer," but an Esquire expose in 2018 outed the Congressman for not only not having a farm, but nearly his entire family moving out of his district to Iowa. In response to being called out as a fraud, Nunes bought a farm.

“Devin; his brother, Anthony III; and his parents, Anthony Jr., and Toni Dian, sold their California farmland in 2006,” reporter Ryan Lizza explained last year. “Anthony Jr. and Toni Dian, who has also been the treasurer of every one of Devin’s campaigns since 2001, used their cash from the sale to buy a dairy eighteen hundred miles away in Sibley, a small town in northwest Iowa where they—as well as Anthony III, Devin’s only sibling, and his wife, Lori—have lived since 2007.”

According to the Fresno Bee, the revelation was a new one to show up in Nunes' financial disclosure statement. Nunes had avoided releasing his disclosure statement, which was supposed to be filed in May, but both Nunes and Rep. TJ Cox were accused of "neglect[ing] to include some of their business interests on those forms."

Now that the documents are finally available, Nunes revealed that he is officially a farmer for the first time in over 10 years. Not once since being elected in 2007 has Nunes claimed any farm, farm equipment, farm assets, or anything farm-related on his financial disclosure statements. He has taken multiple campaign photos on farmland and with farmers, however.

Unfortunately for Nunes, however, he's making $0-$15,000 on the farm. It's unclear if he's a co-owner of the farm, or simply owns the land and doesn't use it for farming or ranching land. The move came only after he was mocked by local Democratic groups for claiming to be a dairy farmer but didn't own or operate a dairy farm.

The Bee cited the Department of Agriculture, which defines a farm as “any place from which $1,000 or more of agricultural products were produced and sold, or normally would have been sold, during the year.”

Nunes has not revealed which product he produces on his farm.

“That’s either the tiniest farm we’ve seen or it’s poor acreage,” said Democratic political strategist Mike Lynch. He also wondered if the amount listed on the form could be a typo. “I’ve never heard of farmland that cheap.”

Nunes has also been touchy on the subject, waging a legal war against parody Twitter accounts that mock him on the social media site. One account that still exists is @DevinCow, who purports to be an Iowa cow that belongs to the California Congressman. The cow has yet to announce if he or she will be moving from Iowa now that Nunes has the land. However, the cow did encourage it's 616,000 followers to mock Nunes' new farm with the #ImAFarmerLikeNunes hashtag.

You can see a few of those tweets below: