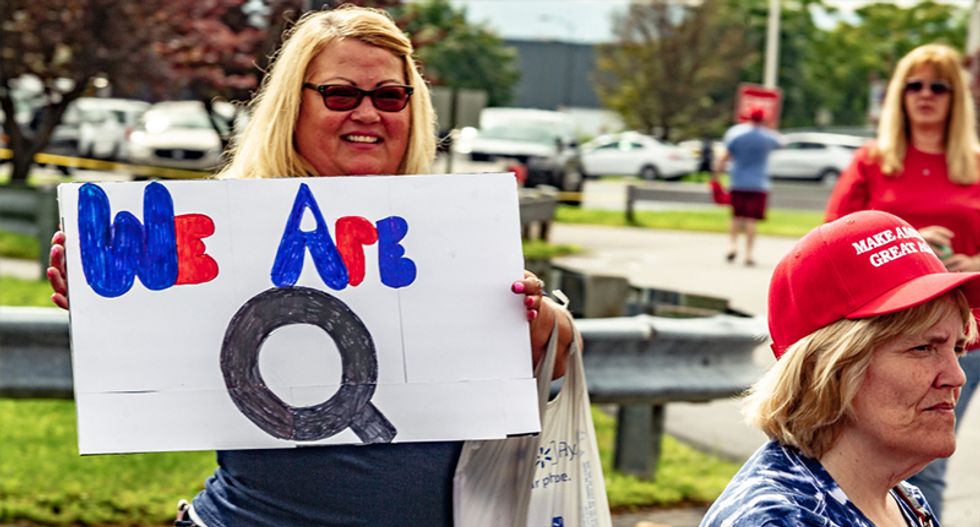 On Thursday, during a speech before President Donald Trump's rally in Cincinnati, pro-Trump activist Brandon Straka used a phrase that is common among believers in the QAnon conspiracy theory.

"Where we go one, we go all!" he announced to the crowd, a common catchphrase of QAnon believers.

Straka, who claims to be a former Democrat, is the creator of the "#WalkAway" hashtag, a meme encouraging Democrats to "walk away" from their party and support Trump. The hashtag trended in 2018, largely with the help of Russian troll accounts trying to sow discord in American politics.

The QAnon theory, which originated from an anonymous online message board poster claiming to be a government official with high-level security clearance, holds that Trump is secretly working to uncover a world-spanning child sex trafficking ring run by Democrats. Some versions of this theory have held that former special counsel Robert Mueller was helping him under the cover of pretending to investigate Russia; others assert that John F. Kennedy Jr. is somehow still alive and a major investigator behind the scenes.

However, Straka said it was inaccurate to portray him as a supporter of QAnon.

Last night I had the honor of opening the Trump Rally in Ohio. My speech was hopeful: uniting 🇺🇸& waking up minorit… https://t.co/yB18BRfwin
— Brandon Straka (@Brandon Straka)1564759966.0

This is not the first time that the #WalkAway activists have been dabbled in QAnon fever — at the #WalkAway rally in October, folk singer J. T. Wilde closed out the speaking lineup with a QAnon-themed guitar song.

(Note: This article previously stated that Brandon Straka had "proclaimed his allegiance to the QAnon conspiracy theory." The story was updated after Brandon Straka tweeted about the article.)