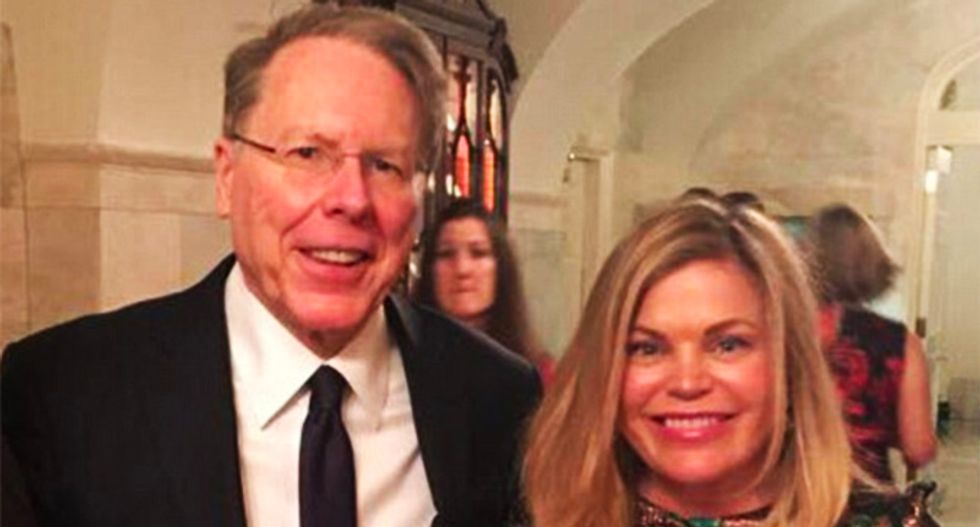 As part of their investigative series on the finances of the embattled National Rifle Association, the Daily Beast is now reporting that the guns rights organization has been paying thousands of dollars to pamper the wife of CEO Chief Executive and Executive Vice President Wayne LaPierre.

According to the Beast, "The NRA spent tens of thousands of dollars bringing hair and makeup artists around the country for the wife of its CEO," which also included, "plane flights and luxury hotel stays for the stylists."

The Beast, which has already reported on NRA spending hundreds of thousands of dollars on CEO LaPierre's wardrobe, stated that Susan LaPierre co-chairs the NRA's Women’s Leadership Forum and, as such, has been the recipient of extra benefits.

"For years now, the NRA has paid for a makeup artist and a hairstylist, both based in Nashville and plugged into the country music scene, to do LaPierre’s hair and make-up at events around the country," the report notes.

With the organization in complete turmoil and contributions plummeting, Susan LaPierre's perks may be coming to an end.

"Those expenditures have raised eyebrows within the NRA. According to one of the sources, the stylists were booked to provide hair and makeup services for LaPierre at its member gathering in Indianapolis this past April," the Beast reports. "But as media reports emerged with allegations of extravagant spending by the gun group, NRA officials worried the Nashville stylists’ presence could attract scrutiny. So they canceled on them at the last minute. Because the cancellation came so late, the NRA still had to pay their fees. "

A spokesperson for the NRA pushed back against the revelation, complaining,"This is the latest example of the smear campaign orchestrated to damage those close to the NRA. In this instance, our former vendor shamelessly targets the wife of the Association’s CEO. Once again, Ackerman McQueen attempts to mislead by suggesting that Ms. LaPierre had responsibility for actions taken by the agency.”

“Ms. LaPierre and other senior members of the NRA fundraising team participate in TV interviews, nationally-televised speeches, and videos used to raise millions of dollars annually," continued Andrew Arulanandam, the NRA’s managing director of public affairs. "Hair and make-up services might be used in those instances–coordinated, directed, and paid for by [former NRA public relations firm] Ackerman McQueen. This is another non-story with facts presented out of context–an act of desperation being fueled by the same group of people who attempted to extort Wayne LaPierre and the Association.”

In an interview, a spokesperson for the PR firm confirmed to the Beast that all expenditures on Susan LaPierre were approved by higher-ups at the NRA.