Seth Meyers mocks 'stupid' Trump for not knowing how visa lottery actually works: 'It's not a scratch-off' 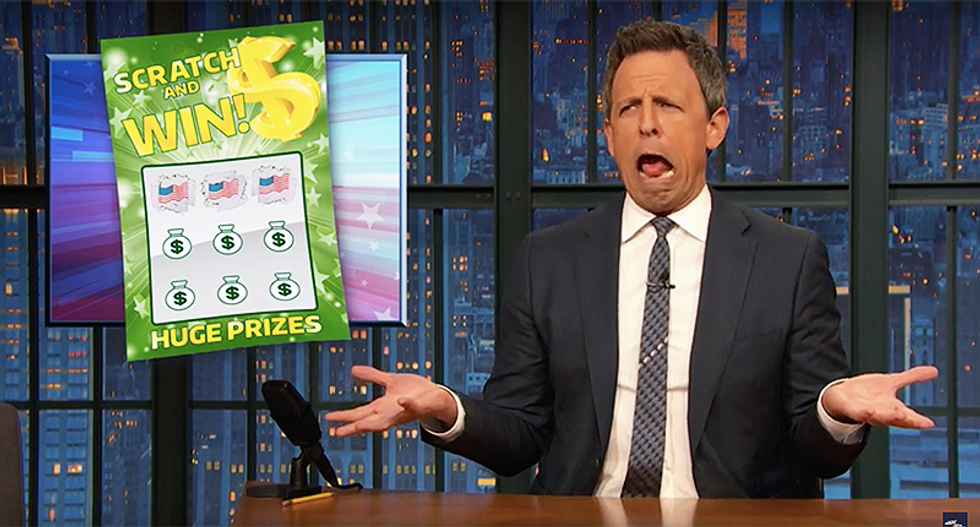 President Donald Trump likes to make things up that make him sound like he knows what he's talking about, but the reality is something very different. Such is the case with Trump's decision that the visa lottery is some sort of "Price is Right" game where countries put people in to send them to the United States.

During an Aug. 1 rally, Trump said that "they" put people into a "basket" and pull them out.

"Well, let's see, this one is a murderer. This one robbed four banks. This one, I better not say. This one, ladies and gentlemen, another murderer," Trump told the audience when describing the lottery.

"It sounds like he's picking his cabinet. Bank robber. Oh, murderer. Oh, oh, you guys, we got a cannibal," Meyers said, showing a photo of Stephen Miller.

Trump asked his audience if the "great" citizens are the people the countries are putting into a lottery. As a point of fact, the country doesn't submit people for a visa lottery in the United States. People submit themselves.

"It's not murders saying, 'The police are closing in! I better make my escape by entering a random drawing!" Meyers mocked. "This is one of Trump's insane conspiracy theories, and he's repeated it countless times throughout his presidency."

"We're not going to be a stupid country anymore!" Trump told one Aug. 2018 rally.

"Well, we're still very much the stupid country. Stupid is our brand. Obama made us cool; you made us stupid," Meyers quipped. "The problem here is that unlike more complicated terms, Trump thinks he knows what a lottery is, so even though he's wrong he's trying to flex his muscles. I'm surprised he didn't just start talking about scratch-offs at some point."

Meyers then went into his bad yet still unbelievably hilarious Trump impression.

"They give you a card, and you use a dime ideally, worse case your thumb, and you just start scratching," Meyers joked. "And if you get three matching flags, that's your new home!"