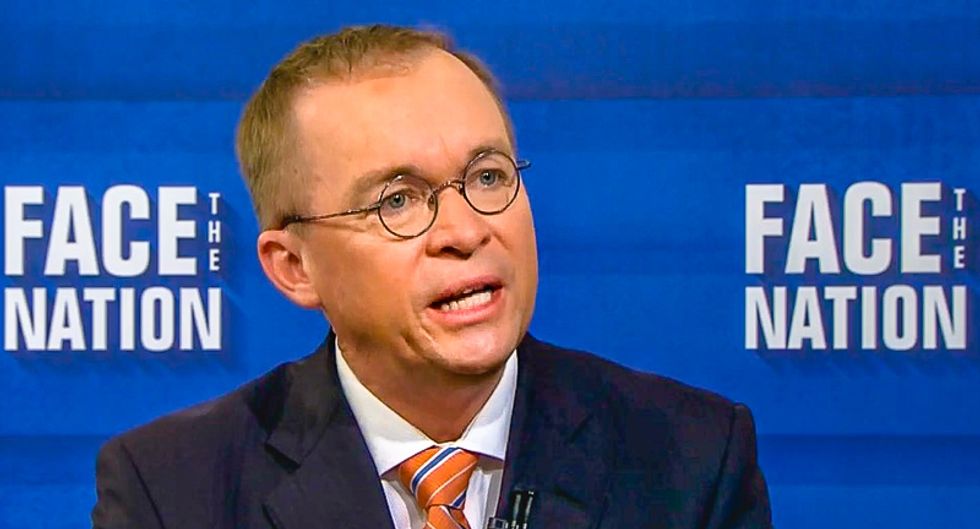 President Donald Trump has spent the last week claiming that any talk of a recession is a conspiracy theory by the media and part of a leftist coup against him.

The message didn't seem to get to his chief of staff Mick Mulvaney, who told Republican donors this week that the recession will be a quick one.

Politico reported the comments Tuesday, saying that it was part of a Jackson, Wyoming fundraiser with White House aides Ivanka Trump and Jared Kushner, who are supposed to be "camping" with their family, according to her Instagram channel.

"At a fundraising luncheon this week in Jackson, Wyo., headlined by Jared Kushner and Ivanka Trump, acting White House chief of staff Mick Mulvaney acknowledged the risks to the GOP elite behind closed doors," Politico reported. "If the U.S. hypothetically were to face a recession it would be “moderate and short,” Mulvaney told roughly 50 donors, according to an attendee."

White House officials are already searching for solutions to a recession that Trump is claiming will never manifest. They're pondering a payroll tax cut and a cut to the corporate tax rate as a potential fix to the recession. However, if the president says that there's no recession, it's unclear how there can be a fix to it.

The fundraiser was part of an effort by former Vice President Dick Cheney, who should have known that it is a violation of the Hatch Act to have White House staffers fundraising.

That puts three White House staffers at the event violating the law. There are currently no consequences for violating the Hatch Act, however, as Kellyanne Conway found out earlier this year. When she violated the law multiple times, it was recommended by ethics officials that she be fired. President Donald Trump couldn't possibly have cared less. He likely won't care about these three staffers breaking the law either.

Dominion Voting Systems suggested on Monday that former President Donald Trump could face a massive lawsuit for misinformation about the 2020 election.

It was revealed this week that Dominion is seeking $1.3 billion in damages after it sued Trump attorney Rudy Giuliani for his role in spreading falshoods about the company.

Speaking to Religion News Service earlier this month, Milwaukee-based freelance journalist and author Tea Krulos discussed the rise of conspiracy theories in America, saying that 2020 "has just been one giant conspiracy theory about everything," adding that the storming of the U.S. Capitol on Jan. 6 was carried out by "an army of conspiracy theorists."

According to Krulos, the prime ingredients that allow conspiracy theories to grab hold of people's minds are fear, anger and division -- ingredients that are plentiful in the current era and are exacerbated by the internet.