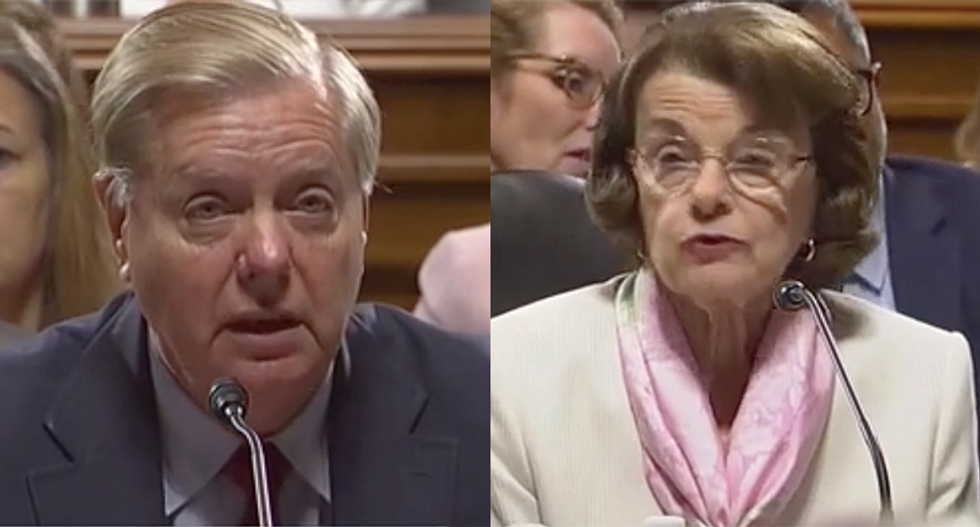 Sen. Lindsey Graham (R-SC) on Thursday ignored Senate Judiciary Committee rules to push through legislation that President Donald Trump has called for. His bill would reverse an order on detention known as the "20-day rule" and allow for children to be held by immigration officials for up to 100 days.

Graham had been working with Sen. Dick Durbin (D-IL) on the bipartisan immigration package since well before Donald Trump's presidency. But the package didn't have the coveted "wall" funding the president demanded. Senate Majority Leader Mitch McConnell (R-KY) thus refused to bring the bill to the Senate floor.

"Mr. Chairman you're not going to respond to our point of order?" asked Sen. Mazie Hirono (D-HI). "This is how it's going to be?"

"Why not?" she asked. "What rule are you pointing to that allows you to do this?"

"Mr. Chairman?" Durbin asked as the roll continued to be called.

"We're going to continue the roll and I'll take any questions you have," Graham said.

When Sen. Sheldon Whitehouse's (D-RI) name was called he said that he refused to vote on the grounds that it was an "illegitimate process."

Feinstein called out the legislation, which she said has "no chance of becoming law."

"Repeatedly, statements have been made that republicans want a solution, not a political issue," she continued. "However, what's happening today I can tell you will not produce a solution. Today on this agenda the 'Secure and Protect Act' does not enjoy broad support. And what's worse, it will increase problems at the border. I'm so disappointed that Republicans have chosen to break the committee rules and the Senate rules in order to force the bill through committee."

She said that the first time the committee even saw the bill on the agenda was last week and that there wasn't a quorum to conduct business.

"For five minutes, there were eight senators present, seven Republicans and one Democrat," she said. "And that was after we waited for over 30 minutes. The quorum requirement in the Judiciary Committee rules stated nine members of the committee, including at least two members of the minority, should constitute a quorum for the purpose of transacting business. The text of this rule is clear."

She said that Thursday was the first time the bill came before the committee when there was a quorum. Rules state that any bill, matter or nomination must be held over until the next meeting for one week.

"Democratic members requested we hold Chairman Graham’s a bill over until the August recess as required — as required by our rules," Feinstein continued. "I urged the chairman to honor that request. It was not. Republicans today are pushing forward with consideration and votes on S.1494. The committee will be breaking and violating its own rules. Why even have rules if they can be broken whenever it is expedient to do so, or whenever it suits the will of the majority or the chairman?"

She recalled Republicans complaining about former Senate Leader Harry Reid (D-NV) for "going nuclear" and changing the rules of the senate. Today's breach of the rules "will be a new precedent that will denigrate this committee and the institution of the Senate."

It's for that reason, Feinstein said she strongly objected to moving forward, saying it would be the first time in her 26 years in the Senate that there was a "blatant disregard [of] quorum and holdover rules."

"In my 26 years, I cannot remember a time when the chairman and ranking member did not come together to develop bipartisan rules for the committee that were adopted by unanimous consent Chairman [Chuck] Grassley (R-IA) and I did that last Congress and Chairman Graham and I did that this Congress," she said. "We are proceeding in this manner to force a vote on partisan immigration — on a partisan immigration bill even though the chairman did not reach out to try to find a compromise or solution."