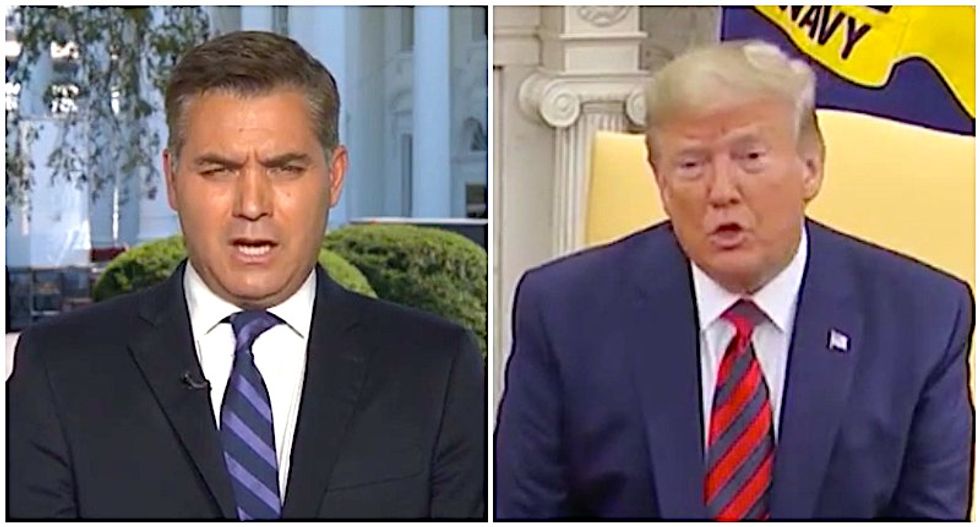 CNN's Jim Acosta busted several falsehoods in President Donald Trump's remarks from the Oval Office about a whistleblower complaint filed against him by an intelligence official.

The president answered questions about the complaint, which appears to center on a phone call he made to the Ukrainian president, during a White House news conference with Australian prime minister Scott Morrison.

"He did not really answer the question whether or not he spoke with the Ukranian prime minister about former Vice President Joe Biden, at one point saying it doesn't matter what he discussed," Acosta said. "But there are plenty of contradictions here that the president offered up to reporters when he was sitting down in the Oval Office, at one point describing the whistleblower has being partisan and part of a hack job, but at the same time saying he doesn't know who the whistleblower is."

"The White House is not saying at this point whether or not they know who this whistleblower is, specifically, who the individual is, or who filed that whistleblower complaint that's being blocked by the administration, in terms of being turned over to Congress," he added.

Acosta said more questions remained, and he accused the White House of "stonewalling" Congress by refusing to turn over the whistleblower complaint, as required by law.

"The president, as you saw during that spray in the Oval Office with reporters, was just not answering questions in a straightforward fashion in terms of what he talked about with the Ukranian president about Vice President Joe Biden and whether or not there was some kind of offer on the table in that conversation," Acosta said.

"It just seems this whistleblower complaint is hanging over everything at the White House and the president and his top officials just are not providing any information," he added.