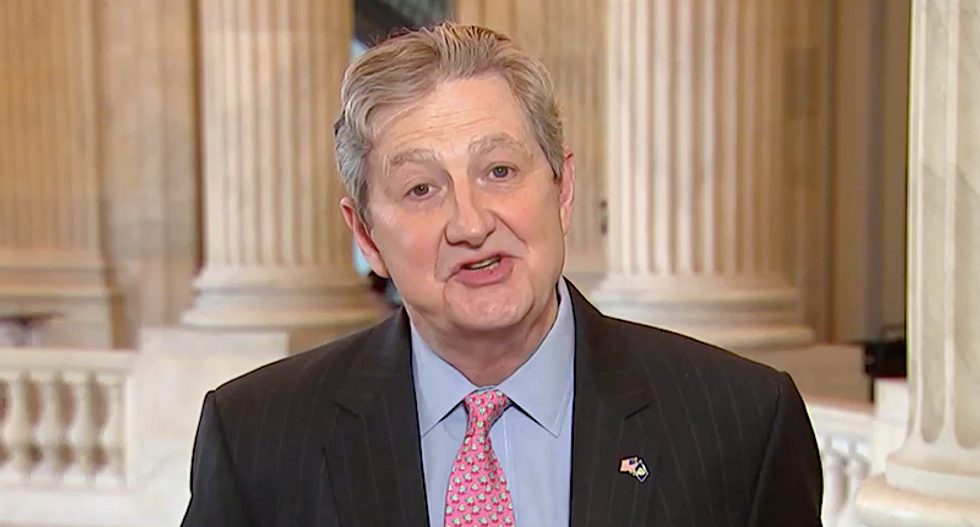 A Republican senator tossed out some colorful colloquialisms as he tap-danced around questions about Rudy Giuliani's dealings in Ukraine.

President Donald Trump's personal attorney claims he has essentially been acting as a private emissary between the U.S. State Department and Ukraine, which Giuliani and Trump have been pressuring to dig up dirt on Joe Biden, but Sen. John Kennedy (R-LA) did not want to discuss those dealings in an interview with MSNBC's "Morning Joe."

"I was with Chuck Todd yesterday, and Chuck asked me about Mr. Giuliani, and my response was, I don't really want to go there,' Kennedy said. "I mean no disrespect, I have never met Mr. Giuliani, but I think I said, and I meant it, he is wild as a March hare. I can't be responsible -- he's a smart guy, but he's a free range chicken. I mean, he kind of gets on out there."

Kennedy's metaphors amused the show's co-hosts, but MSNBC's Willie Geist pressed the Louisiana Republican to say whether he was troubled by reports that Giuliani has been running a shadow policy toward Ukraine on behalf of the president.

"Well, if it's true, sure, but there are going to be all kind of allegations," Kennedy said.

Geist asked the senator if he was questioning the reports on Giuliani's efforts.