Internet torches Trump for calling his Ukraine phone call 'dicey': 'The word you're looking for is criminal' 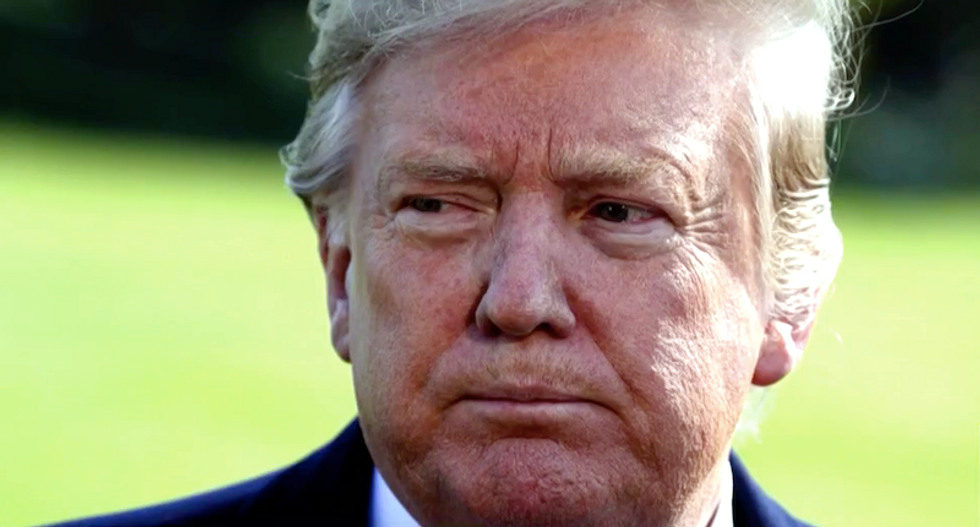 President Donald Trump pushed back against a whistleblower complaint by angrily insisting that more whistleblowers would have come forward if the allegations were untrue.

The complaint reportedly involves a phone call Trump made to a foreign leader, who seems to be the Ukrainian president, but he insisted those claims are untrue -- despite his attorney Rudy Giuliani's apparent admission on live TV.

"The Radical Left Democrats and their Fake News Media partners, headed up again by Little Adam Schiff, and batting Zero for 21 against me, are at it again!" Trump tweeted. "They think I may have had a 'dicey' conversation with a certain foreign leader based on a 'highly partisan' whistleblowers statement."

"Strange that with so many other people hearing or knowing of the perfectly fine and respectful conversation, that they would not have also come forward," he added. "Do you know the reason why they did not? Because there was nothing said wrong, it was pitch perfect!"

....statement. Strange that with so many other people hearing or knowing of the perfectly fine and respectful conve… https://t.co/4OLTIi2MRp
— Donald J. Trump (@Donald J. Trump) 1568982473.0

@realDonaldTrump Whistleblower that your hand picked IG said was credible. That fact that you say they “think” you… https://t.co/lcDCYfMwnA
— It Is What It Is (@It Is What It Is) 1568984369.0

@realDonaldTrump Nothing "dicey" about asking a foreign government, like Ukraine, for help winning an election It's… https://t.co/tdkXffWChJ
— Vickie 🇺🇸 (@Vickie 🇺🇸) 1568984331.0

@realDonaldTrump Your whole term has been dicey. You seem to focus on ways to abuse the rule of law or twist the ru… https://t.co/SCGNLThqdl
— Viktoria (@Viktoria) 1568984063.0

This suggests the president knows the identity of the whistleblower and asserts partisan motives or he assumes any… https://t.co/0p4OlQWM1E
— Kelly O'Donnell (@Kelly O'Donnell) 1568984599.0