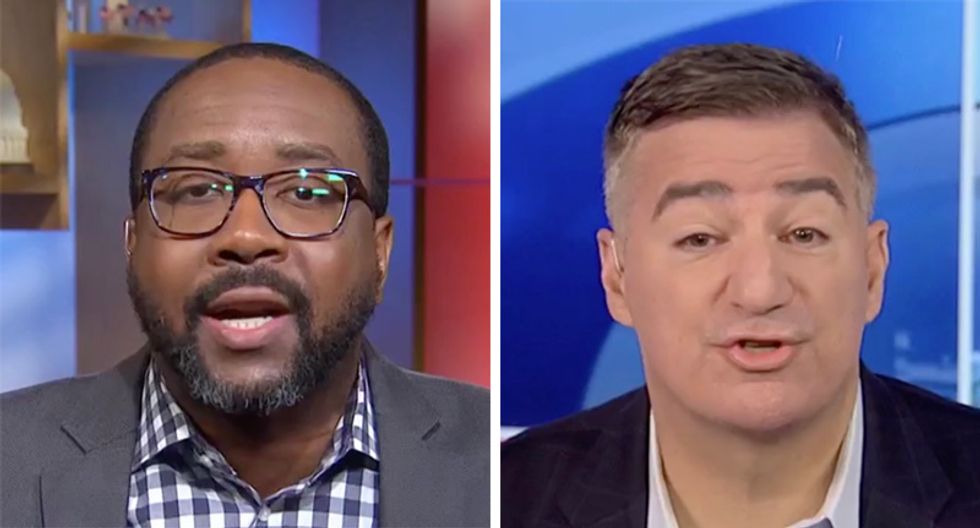 An MSNBC panel discussion on the Ukraine scandal engulfing President Donald Trump grew heated on Sunday morning as one of the president's defenders attempted to "both sides" the issue and accuse former President Barack Obama of criminality.

Appearing with MSNBC host Frances Rivera, Bishop Garrison of the Rainey Center for Public Policy and Brian Darling, president of Liberty Government Affairs, faced off over the pending impeachment hearings of the president which stemmed from revelations that he tried to blackmail the president of Ukraine for dirt on former Vice President Joe Biden.

"I don't want to get in the situation where we're criminalizing politics on both sides," Darling said in defense of the president. "Democrats are calling for the hammer to come down on President Trump."

"Because he deserves it," Garrison interjected.

"Because of this call, he released details of the call," Darling soldiered on.

"That were terrible for him," Garrison exclaimed. "He released details that make him look as though he conducted criminal activity, Brian."

"What crime did he commit?" Darling parried.

As Darling kept repeating, "What crime did he commit?" Garrison snapped back, "Brian, come on. He leveraged his position as president in order to get a political favor."

"Which is inappropriate," Darling replied, to which Garrison stated, "Which is illegal. Under election law it's illegal."

"President Obama committed election --," Darling attempted, only to be cut off.

"No, this is not a both sides thing. Get out of here, Brian, with that," Garrison exclaimed before the conversation turned to each of them talking over each other.