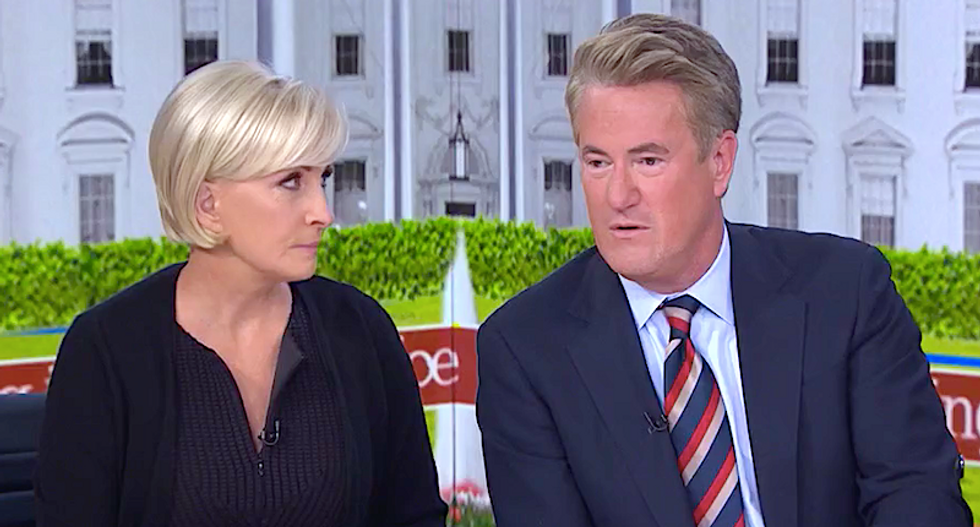 MSNBC's Joe Scarborough laughed uproariously at Rudy Giuliani's careening denials and admissions to possible crimes involving Ukraine, and then darkly noted that his bizarre "gibberish" was straight out of the authoritarian handbook.

"Morning Joe" panelists cracked up at President Donald Trump's attorney angrily denying that he sought election help from Ukraine's government, only to even more angrily justify his reasons for doing what he had just denied.

"When it is going south you put gibberish on the air not to confuse people," said panelist Donny Deutsch, "all of a sudden it's just this noise that's not as distracting that makes you lightheaded."

Scarborough said dictators throw out "gibberish" to confuse and disorient the public, so they can gather more power.

"I could read you books of past governments, from decades past, that actually used this type of nonsense where you throw gibberish out at the population over and over again, nonsense, lies, then you admit, then you wrap it around a couple more lies," he said, "and by the end the supporters of said public figure are so numb to the truth they do not recognize it."

Scarborough said recent autocrats use the same tactics to destroy truth and accountability.

"You could say this about Erdogan, you could say that about what's happening across the globe, you know, in Russia, you could talk about what's happening in Hungary, the Philippines, this is what strongmen, this what autocrats do," Scarborough said. "They keep lying and shooting out gibberish, they admit, they deny until people are so numb to the truth that it just doesn't matter. Rudy's just admitted something outrageous. We're laughing and supporters are going to (say) there's nothing wrong with that, when, of course, any other president would be impeached that afternoon."