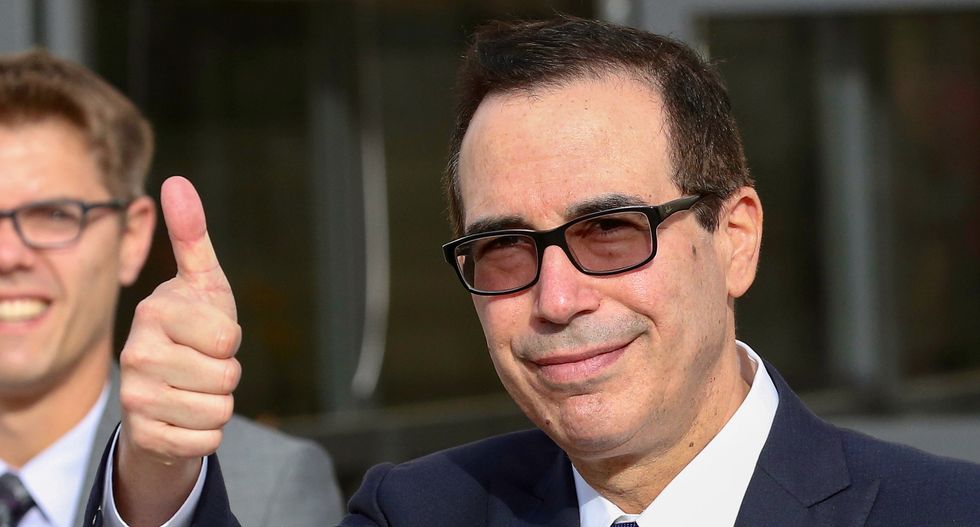 U.S. Secretary of the Treasury Steven Mnuchin (R) gestures as he walks during a G7 for Financial ministers in the southern Italian city of Bari, Italy May 11, 2017. REUTERS/Alessandro Bianchi

According to a report from the Daily Beast, Treasury Secretary Steve Mnuchin's name appears on legal documents for a modeling agency run by a friend of convicted pedophile Jeffrey Epstein who also has been accused of sexual assault.

The reports states that years ago, "Mnuchin [was] listed as the official state point of contact for Next Management Corporation, a company formed in 1988 by modeling-industry insiders Jean-Luc Brunel" at a time when Brunel was accused of drugging and raping at least three models. Brunel has also been accused of supplying young models to Epstein -- a charge he has denied.

According to the Beast, Mnuchin name is found on documents filed with the New York Department of State for Next Management Corporation, explaining, "According to department officials, the DOS process is the person who files a company’s registration papers and receives lawsuits and other official documents on their behalf—usually a lawyer or some other legal representative."

Representatives for Mnuchin said he was unaware that his name was listed in connection with the company, but that he is a longtime friend of Faith Kates, who co-founded the Next modeling agency with Brunel and his brother.

"Mnuchin has been friends with Kates for approximately 30 years, according to the Treasury Department official, and once helped Kates set up a business 'as a friend,'" the Beast reports. "A spokesperson for Kates confirmed the two had been friendly for decades. She said Mnuchin had offered Kates business advice when she started Next Management Company and served as her real estate broker."

As for Kates, she is at a loss how Mnuchin's name popped on on the legal docs for Brunel's modeling agency.