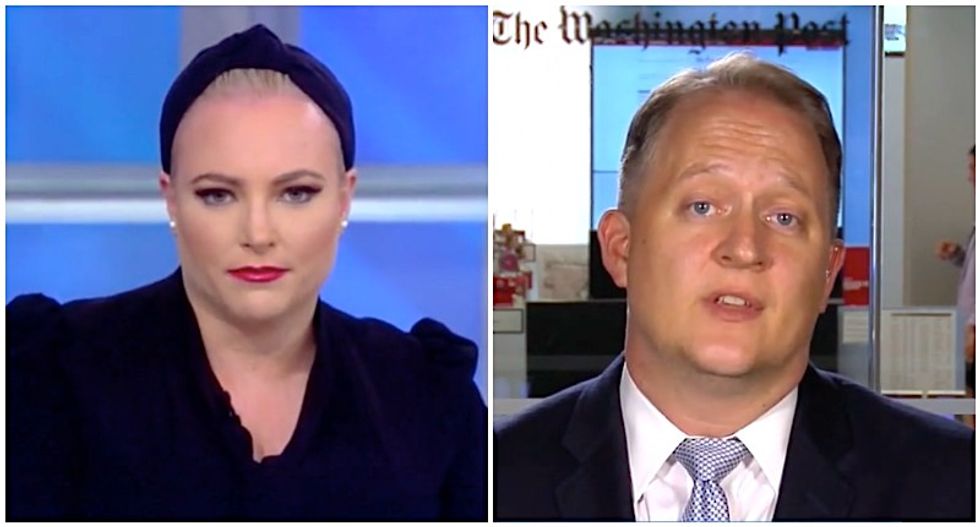 "The View" hosted a Washington Post reporter who revealed bombshell claims about President Donald Trump's phone conversations with a foreign leader, and he explained to co-host Meghan McCain exactly why those allegations were so explosive.

Two former U.S. officials told the Post that an intelligence official was so alarmed by promises Trump made on the call that they filed a whistleblower complaint that acting director of national intelligence Joseph Maguire refuses to turn over to the House Intelligence Committee.

"We have heard presidents promise things to foreign leaders before," McCain said, "like President (Barack) Obama was caught on a hot mic telling then-Russian president (Dmitry) Medvedev he would, quote, have more flexibility after the election. Can you tell viewers why there's a difference between that and this?"

"That's a great question," Harris said. "When we saw that conversation with Obama, you're kind of seeing the horse trading and the deal making."

"While we don't know what the substance was or the details of the conversation with Trump and this leader," the reporter continued, "it was enough that this fairly experienced intelligence official, we think, looked at it and said, this isn't just normal negotiating. This isn't kind of the give and take and the back-and-forth. There is something happening here that rises to the level of some kind of abuse, and the inspector general looked at it and found that at least under the law, that was a credible allegation."

McCain then asked the reporter if he wasn't just trying to make the president look bad before establishing all the facts in the story.

"Just last week CNN was slammed for erroneously reporting a thinly sourced story that they had to remove a spy from Russia that possibly could have endangered him," she said. "Is there a rush to report on Trump because people want to pin things on him, and just because he does so many things that are, as you said, deeply unconventional for a U.S. president?"

Harris agreed that was a fair question, and explained why the Post ran this report based on the evidence at hand.

"People have been asking me today, like, why didn't you wait and find out the information like the substance of the call was?" he said. "We know there was an allegation for some days, and already it was a huge story, and extraordinary just because of the nature of it, and members of Congress, including Adam Schiff, have been implying it was deduced the president was involved and knowing the president himself was the subject of this complaint, and the nature of it, a communication with a foreign leader, that that was significant enough to report and let the American people know about."