WATCH: NBC reporter describes knocking on the door of a former top spy -- living in Virginia 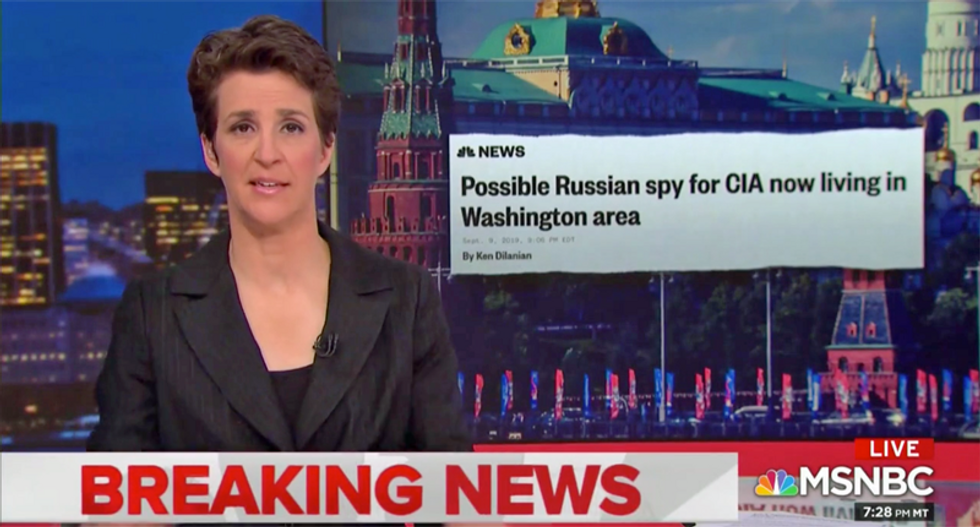 The host of ‘The Rachel Maddow Show’ on MSNBC (screengrab)

Rachel Maddow on Monday interviewed an NBC News reporter who tracked down a former top spy who was living in Virginia.

"Okay, we have some breaking news for you, this came out in the past couple minutes. Big picture, as I mentioned at the top of the show, CNN was first to break this remarkable story today that the U.S. government had gone in 2017 and exfiltrated a high-level spy from inside Russia," Maddow reported.

"A covert operative who was operating within the Russian government, but reporting to U.S. intelligence agencies. It was basically an excellent intelligence asset for the U.S. inside the Russian government. CNN reporting that this covert operative had access to Vladimir Putin and that part of the reason for the extraction was concern in the intelligence community that President Trump was repeatedly mishandling classified information -- including during a meeting with high-level Russian officials in the Oval Office in May of that year," she explained. "The ex-filtration reportedly happened thereafter, basically as an effort to save the source, to keep that source alive in case it was — the source was burned by the Trump Administration."

"A former senior Russian official is living in the Washington area under U.S. government protection, current and former government officials tell NBC News. NBC News is withholding the man’s name and other key details at the request of U.S. officials, who say reporting the information could endanger his life," the story read.

"An NBC News correspondent went to the man’s house in the Washington area and rang the doorbell. Five minutes later, two young men in an SUV came racing up the street and parked immediately adjacent to the correspondent’s car," NBC News reported. "The men, who identified themselves only as friends of the Russian, asked the correspondent what he was doing there."

"Is the correspondent in this story you?" Maddow asked.

"It’s a bit frustrating because I can’t even explain why we started looking at this person in the first place because officials are telling us those details would quickly lead to his exposure," Dilanian said. "And, of course, we’ve now been asked by U.S. officials to withhold a lot of the details, including the name of this person."

"I mean, you talk about the drama of you knocking on his door, he’s not there, you get back in your vehicle and then these young men who you believe may have been U.S. government employees keeping an eye on him pull up right next to you start asking you what you’re doing," Maddow said. "And it’s clear they were Johnny-on-the-spot in terms of watching his house, but you did make it up to the door. So when I think about what happened to people who are perceived by the Russian government to be traitors, people who are perceived to be spies, you look at the assassination attempts we’ve seen around the globe, the fact that you were able to get up to the door suggests they’re not watching him all that close."