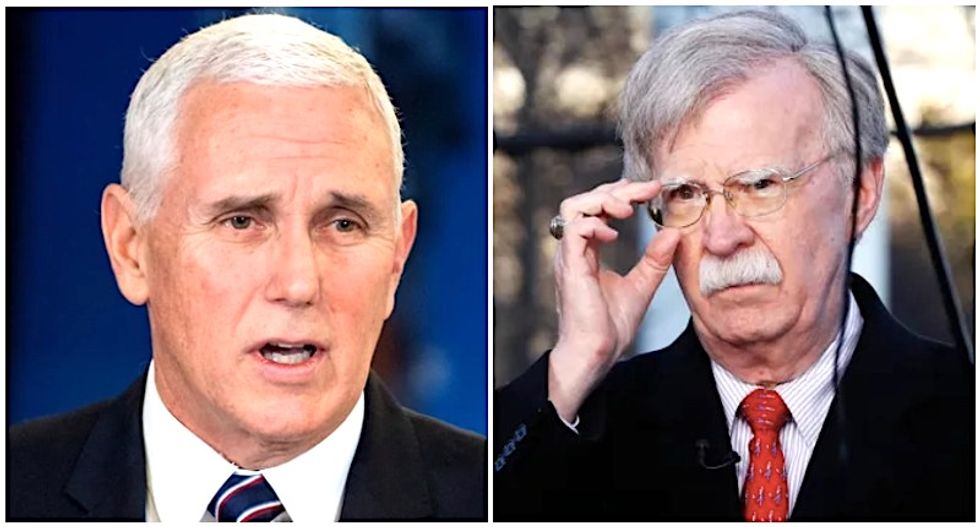 MSNBC's Joe Scarborough fingered Vice President Mike Pence's role in the growing Ukraine scandal -- and identified one former official who could bring him down.

The "Morning Joe" host said the vice president appears to be involved in President Donald Trump's scheme to withhold congressionally approved military aid to Ukraine as leverage to get the foreign government to dig up dirt against Joe Biden.

"This is what Donald Trump usually does, he has other people deliver their threats for them," Scarborough said. "We don't know if there was a quid pro quo saying, if you -- again, because -- I've got to see what's so shocking about this is the question was asked almost a month ago, the question was asked a month ago by an Associated Press reporter, 'Are you holding up military aid until they investigate Biden?'"

Scarborough said he and Brzezinski heard almost two months ago from a former Department of Defense official that Trump was holding up the aid as leverage, and he said the allegation was widely known.

"It seemed to be the worst kept secret in Washington, D.C., that's why Republicans denying a quid pro quo today is so laughable," Scarborough said.

Pence met with Ukrainian president Volodymyr Zelensky early this month in Poland, where he denied speaking about Biden but did admit to discussing corruption -- which Trump has used as a code word for his efforts to investigate the former vice president's son.

Scarborough said the vice president was accompanied in that meeting by the national security adviser -- who recently left the administration in a bitter dispute with the president.

"Guess who knows the answer to that?" he said. "John Bolton. Interesting times ahead."