'Where are the indictments?' Fox News host forced to yell at unhinged Giuliani to get answers about Ukraine 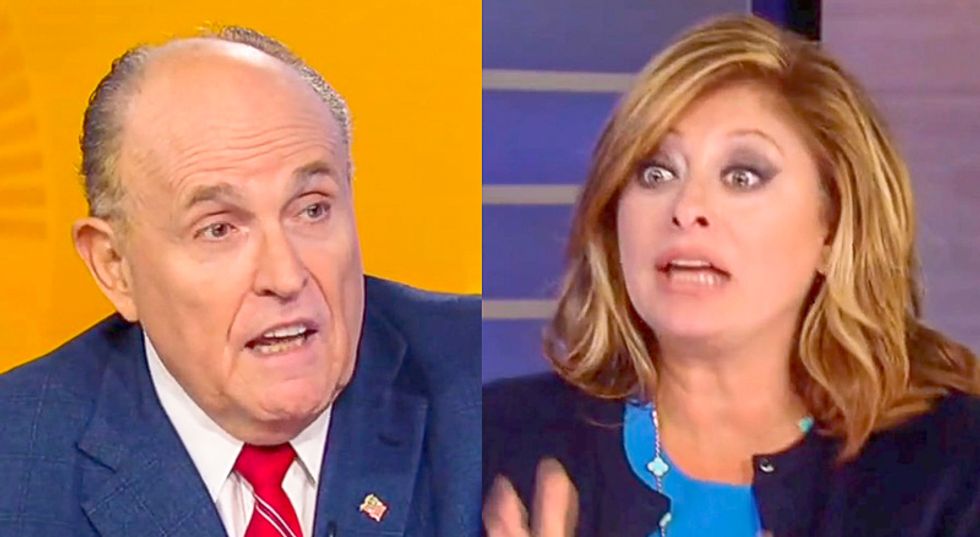 Fox News host Maria Bartiromo had to raise her voice during an interview with Rudy Giuliani to get the president's attorney to answer questions about his role in trying to get Ukraine to investigate Joe Biden and his son.

Giuliani appeared on Fox News just minutes after telling ABC News that he both would and would not cooperate with House Democrats on the impeachment of President Donald Trump.

"We've got to get to what you're doing," Bartiromo said after four minutes of Giuliani attacking Biden. "You are President Trump's personal attorney. Why are you having all these meetings with Ukrainian officials?"

As the interview continued, Bartiromo had to raise her voice to get Giuliani's attention.

"I didn’t work with anybody to try to get dirt on Joe Biden," he insisted at one point. "The dirt on Joe Biden was handed to me by the Ukrainians, amazed that the FBI hadn’t asked for this a year earlier, completely shocked and worried that our system of justice was flawed."

"But, Rudy, the bottom line is you’re not getting that on the Democrat side, and they are in charge," Bartiromo observed.

"I don’t care about the Democrats!" Giuliani exclaimed.

"Where are the indictments?" Bartiromo pressed. "Where are the prosecutions for the people who actually did wrongdoing in the 2016 elections?"

"That is a very good question, and that’s the question we should keep asking," Giuliani said. "And the reality is before they start criticizing me, the question should be what have they done about it? Where’s the Republican Senate investigating extremely serious charges about the former vice president?"