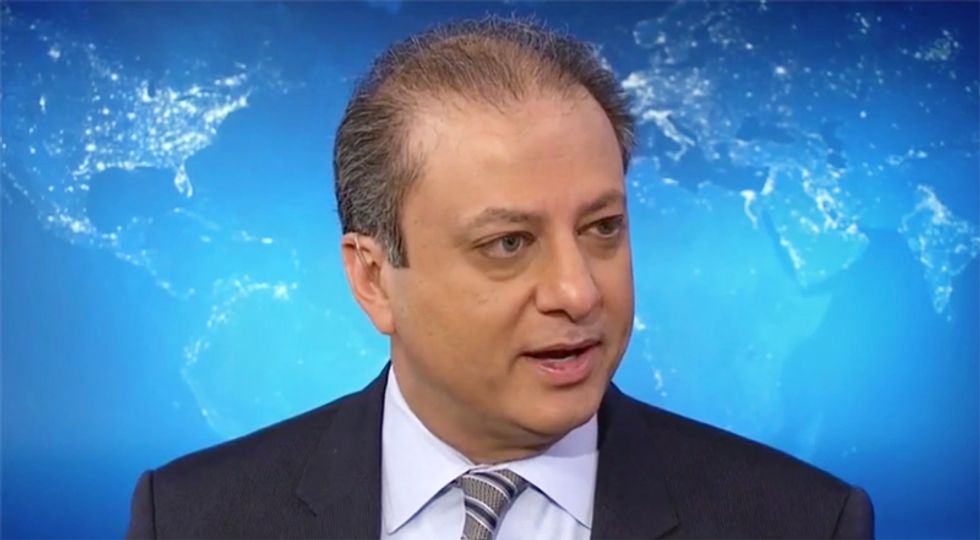 "I have 45 seconds to digest the information?" said Bharara. "I don't know if all of it is true. I haven't been able to read the whole article. But I have to tell you, it's kind of jaw-dropping. This has been a week of jaw-dropping moments, and it's part of the pattern, isn't it? The president of the United States has been on a rampage to try to do one thing, and that is to discredit — of all the 330-some-odd million people in the country, of all the crime that ostensibly happens in this country and around the world, corruption and otherwise — he has singled out one human being by the name of Joe Biden. Who is Joe Biden? He happens to be the person who is leading in the polls to be his challenger in the general election in 2020."

"So, you know, I'm anticipating that as these reports circulate further, that allies of the president will, as they always do after the firing of Jim Comey and the firing of other people will say, he has the absolute constitutional authority and power to relieve people of their duties because they serve at the pleasure of the president," said Bharara. "But again, if this turns out to be true, you have a president who is abusing his power in the service of one thing: his own personal benefit. In this case an election benefit."

"And on top of all that ... you once again have Rudy Giuliani — I don't know what his portfolio is, I don't know what legal capacity he's serving the president in — but the way that story reads, a career diplomat who is respected by members of both parties was removed because Rudy Giuliani didn't like how she was getting in the way of the dirty work that the president wanted Rudy Giuliani to do," continued Bharara. "That's abhorrent. It's going to push the story further."

"That's the kind of thing, over time, when you keep getting stories about this kind of activity happening, there becomes no question in the mind of any rational person of what the president is trying to do," said Bharara. "At some point, I'll be asked whether certain things constitute a crime or not. I don't know. But I think it's very clearly an abuse of power."