An avalanche of confessions: Trump’s chief of staff just admitted a stunning amount of wrongdoing on live TV 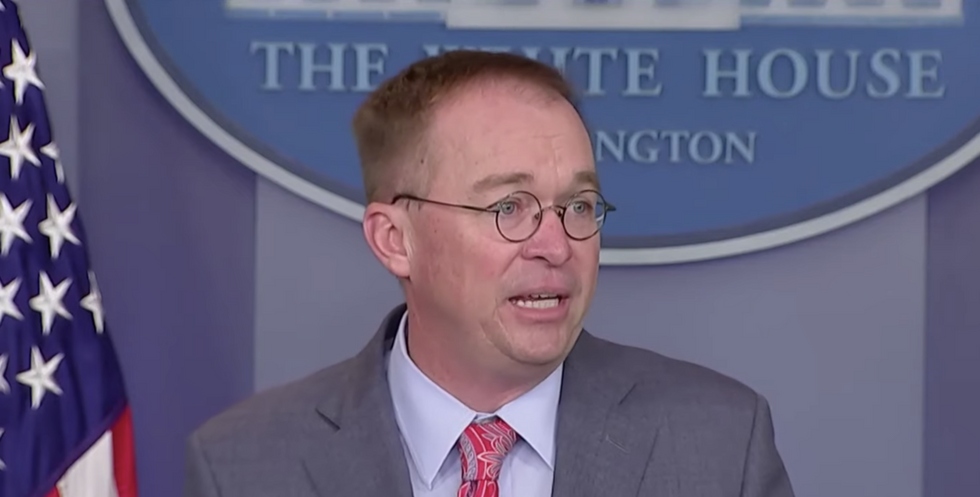 Acting White House Chief of Staff Mick Mulvaney adopted a new approach to President Donald Trump’s war on impeachment in a Thursday press briefing: admitting a gigantic amount of wrongdoing in one sitting and daring Republicans to care.

The avalanche of confessions began in the White House briefing room, where Mulvaney revealed that the United States will host the upcoming G7 summit of world leaders at Trump National Doral in Miami, the president’s own Florida resort.

This is a grotesquely corrupt move, and the White House knows it. Even if, as Mulvaney claimed, the Doral was the best possible location for the G7 in the country — a ridiculous assertion — it would still be incumbent on the administration to choose another location to avoid the appearance of corruption and the reality of a conflict of interest. Mulvaney claimed that, all things considered, Trump decided he would “take the hit” of accusations of corruption. But it’s not just Trump who “takes the hit,” it’s the entire federal government, and the United States itself, that gets stained with corruption, and that’s a condemnable choice to make.

Mulvaney even admitted: “There’s plenty of other good places in this country to hold a large event. There’s no question.” And yet, they still chose absolutely the most corrupt place to do it.

The chief of staff also revealed that it was Trump himself who suggested the Doral as a possible location, exacerbating the wrongdoing. If some neutral process had selected the location as a possible site for the meeting, it still should have been rejected for obvious reasons, but at least the choice would have been more defensible. But no — Mulvaney made clear that Trump’s dual role as both a private businessman and president was the reason Doral was considered at all in the first place.

Asked if it was important for the United States to send a message about “self-dealing” to other countries, Mulvaney simply said “no.” So on top of the corruption of the U.S. government, Mulvaney sent the explicit message to countries around the world that they shouldn’t worry about self-dealing.

All that, of course, was galling enough on its own. But it also completely undermines Trump’s defense in the Ukraine scandal, in which the president has claimed that he only asked the foreign country to investigate his political rival, Joe Biden, because he cares about fighting “corruption.” That claim was laughable from the start, but now Mulvaney is telling the press that the White House literally doesn’t care about self-dealing. So his admission confirms Trump lied.

The Doral announcement could and should constitute a justification for impeachment all on its own. But not only did Mulvaney divulge all that in the press conference, he also made a decisive case against Trump in the Ukraine scandal.

For the first time, Mulvaney admitted that part of the reason that that congressionally approved military aid to Ukraine was held up by the White House was because Trump wanted the country to investigate the 2016 U.S. election. When it was pointed out that this was a “quid pro quo,” Mulvaney responded: “We do that all the time.”

But this admission reveals multiple layers of wrongdoing. First of all, it proves Trump lied on many occasions when he has denied that there was any quid pro quo with Ukraine. In fact, he explicitly denied that the holding up of the aid was tied to the investigation to Sen. Ron Johnson (R-WI) in early September. Many Republicans have used this denial as a key defense of the president. Now it is has crumbled.

Mulvaney tried to deny that the military aid was used as a quid pro quo with regard to an investigation of Joe Biden and his son’s ties to the Ukrainian oil company Burisma. But this denial is not credible. The aid was held on July 18, and a week later, on July 25, Trump tied the request of an investigation of 2016 and an investigation of the Bidens together while asking for a “favor” from Ukrainian President Volodymyr Zelensky. This ask of a favor came in direct response to Zelensky bringing up the United States’ military support for Ukraine. Even if Trump and the White House had made it clear that the military aid wasn’t tied to the request for an investigation of Biden — which there’s no evidence they ever did — it would have been reasonable for Zelensky to assume the two were connected.

But even if, contrary to the facts, the military aid were withheld only to prompt a Ukrainian investigation into 2016, and having nothing to do with the Bidens, this would still be wildly inappropriate. As one reporter noted during the press conference, Trump will essentially be running against the Democratic National Committee in 2020 no matter what; asking that its conduct be reviewed by a foreign government, using the power of the Oval Office and illegitimately delayed congressional funds, is a grotesque abuse of power and election interference.

The Justice Department is reviewing the events of the 2016 campaign, as it has a right to do. But it has its own processes for communicating with foreign governments about such investigations. There’s no need for the president to get involved — and certainly no need to involve his personal lawyer, Rudy Giuliani, as he did.

Presidents, indeed, are supposed to remain walled off from specific investigations to preserve the rule of law and to — once again — avoid even the appearance of corrupting political influence or conflicts of interest. This is true as a general matter, but it’s even more emphatically the case for a review of the events of the 2016 election, in which Trump himself is deeply invested and in which he has a strong personal interest in the outcome.

This is, in short, a slam dunk case for impeachment. All the wrongdoing is there, and most of it from the mouth of Trump’s own chief of staff.