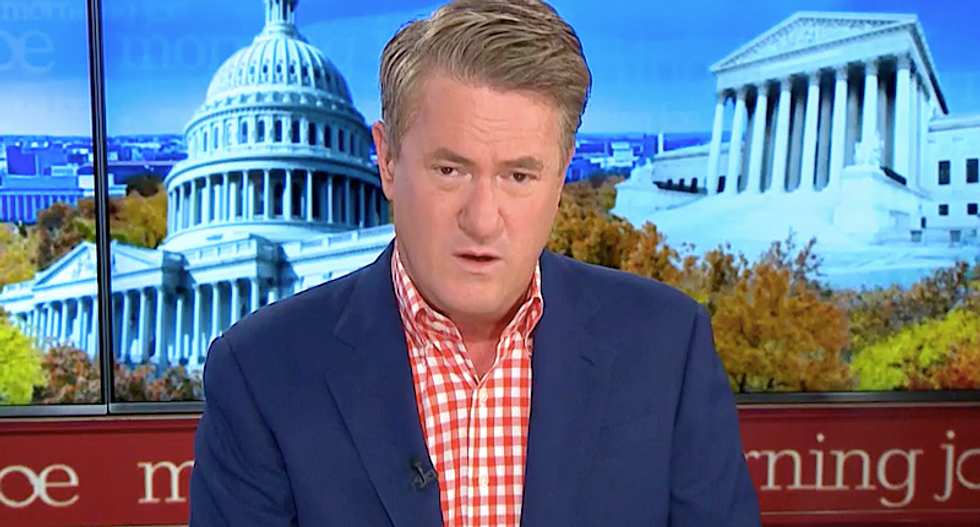 "Well, (these numbers) are breathtaking, actually, is what they are for anybody observing politics," the "Morning Joe" host began. "For Donald Trump, for people close to him in the White House, these are breathtaking numbers, they're staggering numbers."

He warned GOP donors to stop wasting their money on efforts to help Trump fight impeachment, because they're clearly not working.

"These poll numbers are occurring at the same time they are raising hundreds of millions of dollars and spending tens of millions of dollars to burnish their image on television, in digital ads," Scarborough said. "That money is being burnt if the you're giving your money to Donald Trump right now, it's literally going up in flames in these digital ads because the more they put out there, the more his numbers collapse and the more erratic he gets."

Scarborough said the president's conspiracy theories are simply not taking hold with the public.

"Of course, 66 percent say that that call that Donald Trump said was perfect to the Ukrainian president, they said it was wrong," he said. "Two-thirds of Americans said it was wrong. What about this final number that almost half of Americans say, in this Fox News poll, say Donald Trump is getting what he deserves, and a far less number of people actually clinging to their conspiracy theories that suggest that people are out to get Trump. Bad news on all fronts from this Fox News poll."

"The very things that Donald Trump did to get elected, the very things did he for the first two and a half years of his presidency to help him survive scandals, are now working against him," Scarborough said.

Polls show a solid majority believe the impeachment inquiry is legitimate, and nearly two-thirds believe the president is stonewalling a lawful investigation.

"You can see what he did yesterday," Scarborough said. "The attacks he received from Republicans were without a doubt the fiercest he's received since he's won the party's nomination back in the summer of 2016."

"You know, again, this is Donald Trump, hey, let's change the subject, let's create another controversy, one that's even going to inflame people even more," he added, "and what happens, it just makes Republicans turn on the man even more ... This is the first time the man couldn't walk out on Fifth Avenue, shoot somebody and get away with it, because it seems that a majority of Americans are finally on to him."