Did Giuliani's divorce drive him crazy -- or did Rudy's mental decline end his marriage? 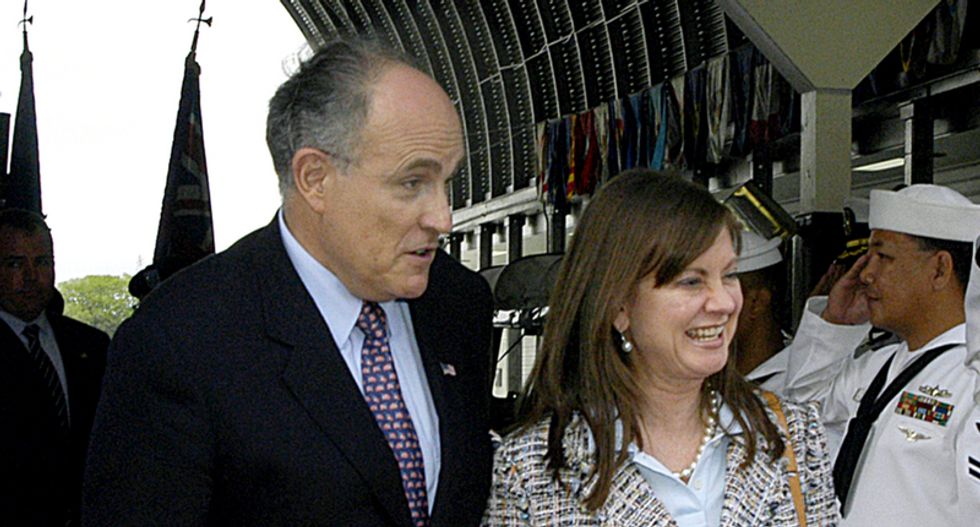 Friends and fans alike say Rudy Giuliani isn't the same man who gained fame as "America's mayor," after steering New York City through the aftermath of 9/11 -- but it's not entirely clear what changed.

Old friends say his marriage to third wife Judith Giuliani -- which began as an extramarital affair splashed across New York tabloids -- changed him, especially after his response to the Sept. 11, 2001, terrorist attacks made him a celebrity, reported the Washington Post.

The former mayor's friends say Giuliani pushed them aside after his new wife turned him into a country club guy.

Giuliani had been wealthy before, but after he was term-limited out of office the former mayor was making $100,000 per speech and flying private jets with his wife -- who required an extra airplane seat for her designer purse, which she was unwilling to place on the floor.

Frydman explained in a New York Times column just last week that Giuliani was no longer the same man he had known and admired 25 years ago, and he even recently removed the photo he carried in his wallet of the former mayor presiding over his 1994 wedding ceremony.

"Some longtime Giuliani intimates point to the death on July 7, 2016 of his longtime best friend and political adviser, Peter Powers, as the moment that Rudy lost his way," Frydman wrote. "Others cite Rudy’s marriage in 2003 to Judith Nathan, his soon-to-be third ex-wife, as transformational."

"Rudy was a pizza and Diet Coke guy when I met him in 1992," Frydman added. "But he became an Upper East Side and Hamptons socialite and, worse yet, a Palm Beach neighbor of Donald Trump."

Frydman said the former mayor "went to work for what seemed like every rich bad guy and tinpot dictator who called" after leaving office in 2002, but went even further astray after becoming Trump's personal attorney in April 2018, the same month Judith filed for divorce.

“I don’t know that we can blame Rudy’s current meltdown on the divorce,” Rebecca Katz, a New York political consultant, told the Post. “It seems more likely that Rudy’s meltdown led to the breakdown of his marriage, rather than the other way around.”

The 64-year-old Judith Giuliani receives $42,000 a month in alimony, which she complains is nothing compared to the $230,000 per month they spent as a couple.

Her attorney argues that Giuliani earned $17 million working for the law firm Greenberg Traurig in 2016 and 2017, and accused him of deliberating concealing income by working pro bono for Trump.

Complicating matters could be the $500,000 paid to Giuliani by his Ukrainian-American associate Lev Parnas, who was arrested last week on campaign finance charges.

Giuliani, for his part, argues that he can't afford to pay any more to his estranged wife because he's working for free and paying his own expenses, which his lawyer says forced him to borrow money to pay taxes.

The couple has fought in court over Christmas decorations, TV remote controls and visits to the private clubs they've joined, and the judge in the case doesn't understand why they won't just reach a settlement instead of making their divorce a public spectacle.

“It is beyond me why either party in this case would have an interest in having all of this done publicly," said Judge Michael Katz. “(Settling) would treat their relationship and marriage with more respect than divulging all our dirty laundry out for public consumption.”

Judith Giuliani, who was a hospital sales rep and trained nurse when she met the still-married mayor in 1999, agrees her husband isn't the same man she married -- and she suggested a medical reason for his change.

“It was an ongoing process that began when he lost the (2008) presidential campaign,” Judith Giuliani told New York magazine last year. “For a variety of reasons that I know as a spouse and a nurse, he has become a different man.”

Once upon a time, the Conservative Political Action Conference was a relatively traditional and "mainstream" gathering of many divergent currents on the political right.