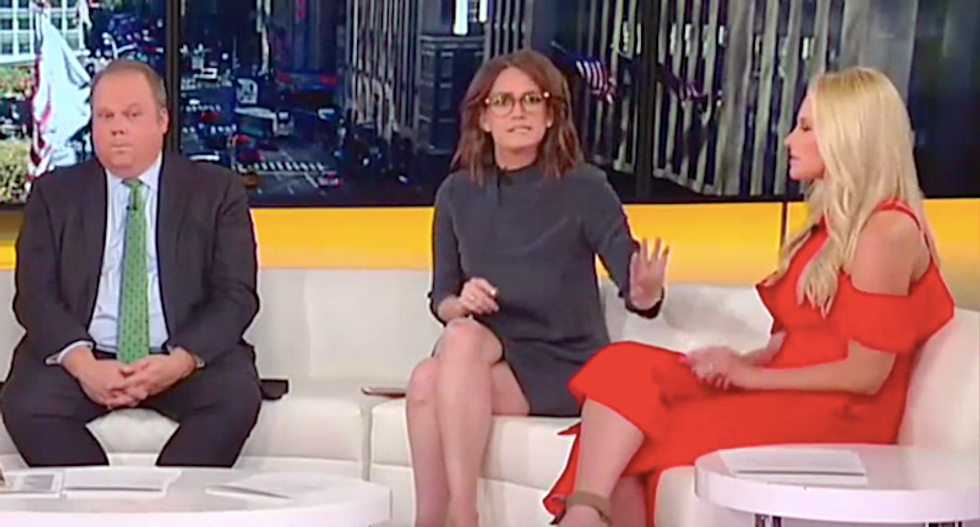 Panelists on the Fox News program "Outnumbered" agreed that President Donald Trump shouldn't have asked Ukraine and China to investigate Joe Biden -- but then they clashed over nepotism.

Co-host Melissa Francis cast doubts on Trump's claim that his request was not political for China to investigate alleged corruption by the former vice president, and panelist Chris Stirewalt said the president had crossed a number of lines.

"The president shouldn’t have done this stuff," Stirewalt said. "He can’t do it himself without it smacking corruption on his end. That’s we work through channels. That’s why you let other people do it. That’s when you tell your attorney general, your secretary of state."

Host Harris Faulkner asked whether Trump should have involved Rudy Giuliani in efforts to pressure foreign governments to investigate a political rival.

"You should definitely not do that," Stirewalt said, as Faulkner laughed. "You should definitely not send your personal private attorney out on a wild-goose chase across the continent of Europe looking for meetings, trying to get stuff. You should be working with State Department officials, you shouldn’t do any of that stuff. You end up at a point that looks like you’re using your office for political advantage."

Francis listed the evidence against the former vice president's son Hunter Biden, who struck business deals in China with his investment partners, but panelist Jessica Tarlov said there's no proof of any wrongdoing.

"It’s always a bad idea to ask a communist dictator, who (the president) says is our No. 1 geopolitical foe, for a favor," Tarlov said, "and for that favor to be investigating your political opponent."

Francis suggested that Trump was just trying to call attention to the alleged corruption by asking China to investigate, but Tarlov disagreed.

Tarlov said the former vice president's son had done business in China for years, and there was no evidence he abused his father's elected position to obtain investments -- although she agreed his last name helped open doors.

"Nepotism," Tarlov said. "This is the acceptable kind of swampy nepotism."

Francis blew up, and said Hunter Biden provided access to his father, which she called "public corruption."

"It is not public corruption for there to be nepotism," Tarlov explained.

Tarlov said Hunter Biden's lawyer maintains he didn't make any money off of that deal, and she then pointed to Trump's children, who are profiting from the family business while their father serves in the White House.

"Jared Kushner is in charge of Mideast policy," Tarlov said, referring to the presiden's son-in-law and senior adviser. "I don’t even know if he took a political science course in college."

Panelist Tomi Lahren agreed that Trump should have stayed out of asking foreign governments to investigate a rival, but she said the media should have covered the president's allegations against the Bidens.

"The difference is what is illegal and what isn’t," Tarlov argued. "What Hunter Biden has done, it is not illegal. You can say it stinks, that it shouldn’t be that way."

"You keep repeating that," Tarlov said, "but no one has concluded that is the case."