GOP lawmakers are exhausted from having to defend Trump: 'It feels like a horror movie' 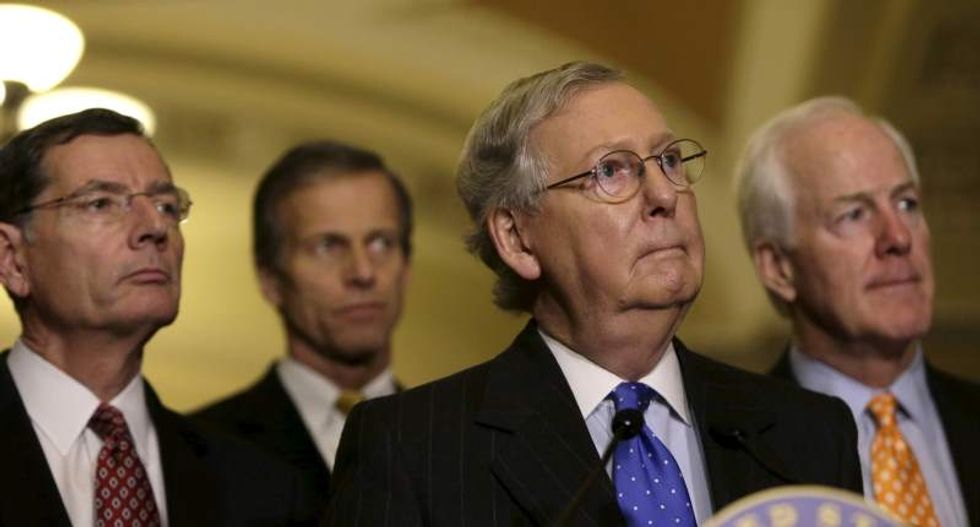 According to a report in the Washington Post, GOP lawmakers in both the House and the Senate have grown weary of having to provide a daily defense for Donald Trump's actions which may have an impact on whether he is impeached or not.

As the Democratic-led House is proceeding with daily impeachment inquiry hearings -- including a rare one over the weekend -- Republicans are wondering when it will ever end.

According to the report, "Republican senators are lost and adrift as the impeachment inquiry enters its second month, navigating the grave threat to President Trump largely in the dark, frustrated by the absence of a credible case to defend his conduct and anxious about the historic reckoning that likely awaits them."

Summing it up, one anonymous GOP senator said, "It feels like a horror movie.”

"In hushed conversations over the past week, GOP senators lamented that the fast-expanding probe is fraying their party, which remains completely in Trump’s grip," the report continued. "They voiced exasperation at the expectation that they defend the president against the troublesome picture that has been painted, with neither convincing arguments from the White House nor confidence that something worse won’t soon be discovered."

According to Al Cardenas, former chairman of the American Conservative Union, for the moment, Republicans are standing by Trump but he senses it may not last much longer.

“There’s frustration. It feels to everyone like they’re just digging a hole and making it worse. It just never ends. . . . It’s a total [expletive] show,” added a GOP strategist who has been in contact with multiple Republican senators.

The report also notes that Senate Majority Leader Mitch McConnell (R-KY) has shared "concerns in private conversations with other senators" and was forced to hold a meeting explaining how impeachment could play out.

According to William A. Galston, at the Brookings Institution, Republicans have brought their Trump woes on themselves.

“They normalized a president whose conduct they are now being asked to judge as so abnormal as to warrant his removal from office,” he explained. "To the extent that they quietly harbor conscientious objections to what the president is doing — or, even more spectacularly, how he’s doing it — they have to weigh the calling of conscience against political considerations. There’s a reason why ‘Profiles in Courage’ is a very short book. Courage is not the norm. It’s the exception.”