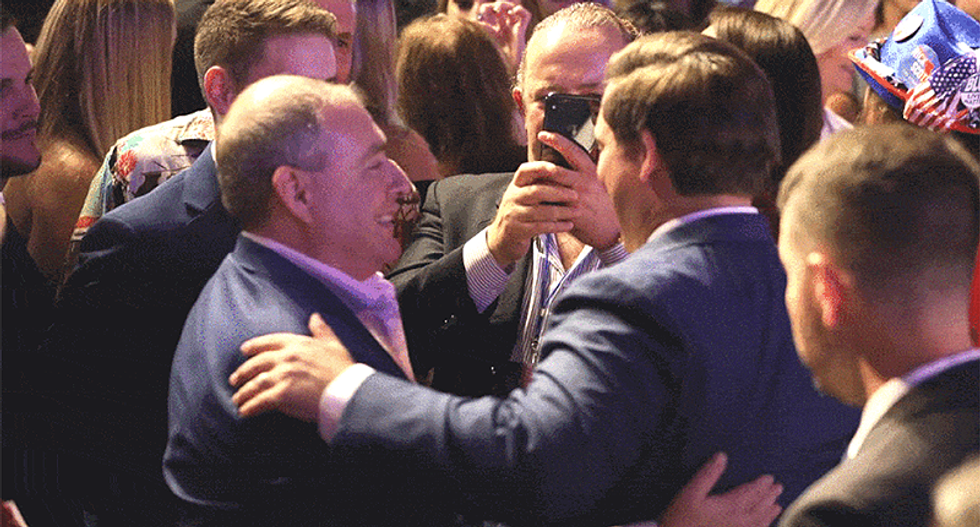 It's been mere weeks since Rudy Giuliani associates Lev Parnas and Igor Fruman were indicted and arrested while attempting to leave the country. The two men are accused of significantly violating campaign finance laws by allowing wealthy international donors to funnel money through them for political candidates in exchange for demands. Republicans who have found themselves associating with the men are already backing away in fear.

One such Republican is Florida Gov. Ron DeSantis, who claimed he knew Parnas but only as a Trump backer. The two men were seen standing with DeSantis on the night of his election in 2018, though he still downplayed knowing the men that well. Days after the photos were released, he was then outed with a video where he was seen hugging Parnas and Fruman. DeSantis still maintained he had no real association with the men, but Politico uncovered Monday that DeSantis spent the last part of his 2018 campaign with Parnas at a series of rallies before election day.

"In a photograph taken Nov. 4, two days before the election that propelled DeSantis to victory, Parnas is next to the smiling candidate at a campaign rally in South Daytona," said Politico, linking to a Getty image. "Former Florida Attorney General Pam Bondi is standing nearby in the shot, which was published by Getty Images."

Parnas is seen smiling with DeSantis, who is seen standing to Parnas left beside an event stage.

Later that same day, Parnas was seen at a Boca Raton event 200 miles from the first one, just an hour and a half later.

Parnas attorney Edward MacMahon said, “if he was in the pictures,” then Parnas was likely on the DeSantis campaign plane, Politico reported.

On Parnas' Instagram account, he was seen on a private plane with Giuliani the day prior to the campaign events.

“I knew Parnas. I didn’t know the other guy as much,” DeSantis said in a statement last week. “But this was a guy who was at [Republican National Committee] functions, Trump Victory functions. He was at a lot of these things.”