'Live by the sword, die by the sword': Morning Joe says Trump has only himself to blame for 'lock him up' World Series chant 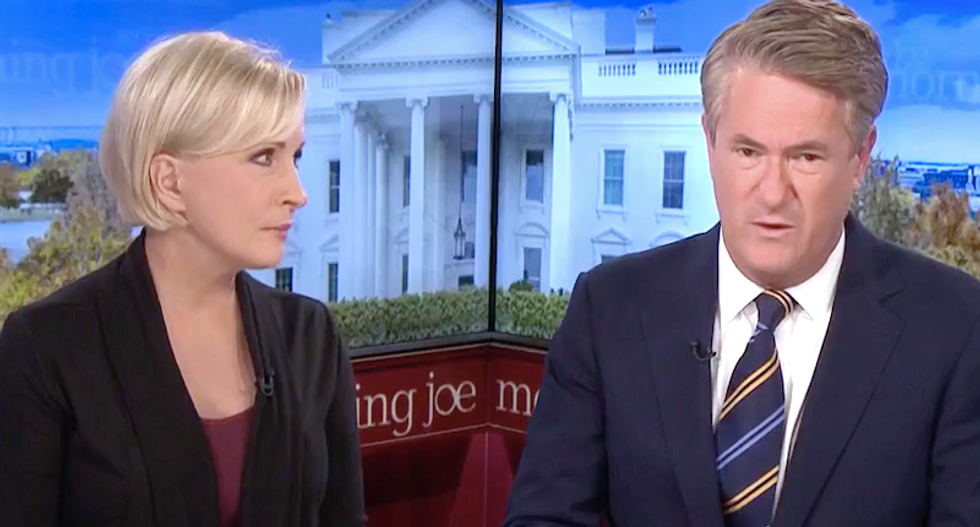 MSNBC's Joe Scarborough and Mika Brzezinski took no joy in the jeering chants against President Donald Trump at the World Series, but they said he had brought the hate on himself.

The "Morning Joe" hosts were dismayed that the crowd showered boos that registered 100 decibels as Trump was announced at the Washington Nationals-Houston Astros game, and then chanted "lock him up" -- inverting the president's campaign rally taunts at Hillary Clinton.

"It was sort of startling and sad to hear those chants of lock him up, yesterday from the crowd," Brzezinski said. "I didn't take pleasure in that."

Scarborough agreed, but said the president was to blame for the poisonous political atmosphere.

"There have been many traditions brought about by Donald Trump and his supporters and people around him that are un-American, even fascist-like," he said. "The chants of 'lock her up,' 'send her back.'"

Locking up political opponents is something dictators do, Scarborough said, and he was alarmed to hear even Trump's critics adopt that undemocratic rhetoric.

"That's what, unfortunately, has been fed into America's political system through Donald Trump, and last night, it was turned against him," Scarborough said. "But again, it's un-American, and the people in the stands that were doing it last night shouldn't have done it. In fact, you know, they learned, they have learned from Donald Trump -- that's what you do to political opponents."

Scarborough hoped that Trump would stop encouraging those chants at his campaign rallies, now that he's been on the receiving end of it.

"I remember when Barack Obama was leaving office, a lot of liberals wanted George W. Bush tried by some international tribunal," he said. "I remember us saying don't do it, because it will be you on the other side of the presidency, and then have to worry about retribution from the person that you follow."

"Of course, you never think," he added, "nobody ever thinks that anybody will follow them as president of the United States when they first get in, just like Donald Trump, he's never imagined it. But live by the sword, die by the sword, and sure enough, now you have Donald Trump having (Attorney General Bill) Barr conduct an outrageous, an outrageous investigation against Barack Obama, and Donald Trump even calling the 44th president of the United States treasonous."

"It's like this guy is just not smart enough to figure out that what goes around comes around," Scarborough concluded, "and what he dishes out to others will be dished out to him."