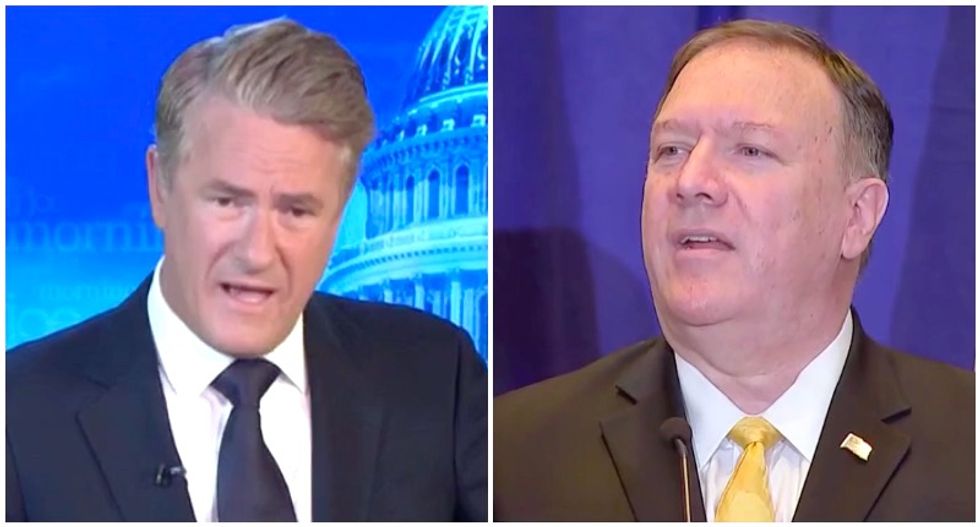 The secretary of state undercut claims made by an intelligence committee whistleblower before it was revealed he took part in Trump's call to the Ukrainian president, and the "Morning Joe" host blasted Pompeo for thumbing his nose at congressional oversight of his department.

"That guy went to West Point," Scarborough said. "What a thug, he's acting like a common thug. He's lying about our country. He was in on a call that he knows crossed every line of propriety. He was taught that at West Point, and he's behaving like a thug, now he's behaving like a thug in trying to basically tell Congress that he can do whatever he wants to do and not to reach out to anybody at the State Department."

"It's as if he's adopted Donald Trump's view of the Constitution, that the Second Amendment gives the executive branch unlimited power," he added.

Scarborough blasted the secretary of state as lawless, and he said the military veteran and public servant should be ashamed of his own debasement.

On Thursday, Axios reported that House Republicans have already attempted to introduce impeachment articles against President Joe Biden 14 times — more than the 13 that were issued by House Democrats throughout the entire four years of former President Donald Trump's lone term.

To date, virtually none of the articles of impeachment actually allege any sort of criminal wrongdoing or abuse of power by the president, instead seeking to impeach him over various policy disagreements and right-wing talking points.

The Republican nominee for governor of Pennsylvania is voicing support to amend the U.S. Constitution to regulate money in politics.

State Sen. Doug Mastriano introduced Pennsylvania Senate Resolution 343 with five other GOP lawmakers, "supporting an amendment to the Constitution of the United States to establish that election spending may be regulated to ensure that every resident may exercise the rights to free speech, political participation and meaningful representation, and to protect republican self-government and federalism."