New evidence that an extraterrestrial collision 12,800 years ago triggered an abrupt climate change for Earth 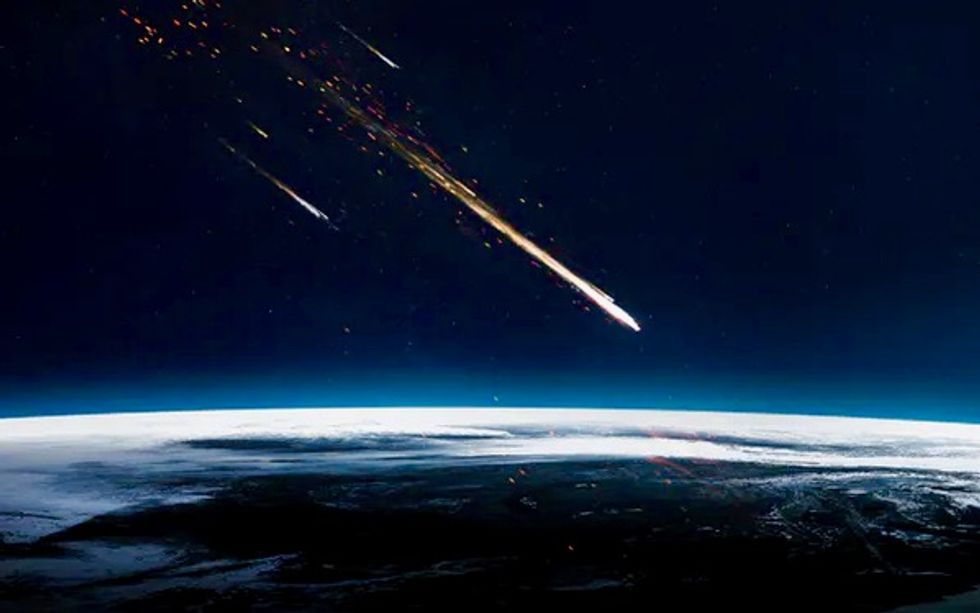 A collision from space would leave its mark on Earth. Vadim Sadovski/Shutterstock.com

What kicked off the Earth’s rapid cooling 12,800 years ago?

In the space of just a couple of years, average temperatures abruptly dropped, resulting in temperatures as much as 14 degrees Fahrenheit cooler in some regions of the Northern Hemisphere. If a drop like that happened today, it would mean the average temperature of Miami Beach would quickly change to that of current Montreal, Canada. Layers of ice in Greenland show that this cool period in the Northern Hemisphere lasted about 1,400 years.

This climate event, called the Younger Dryas by scientists, marked the beginning of a decline in ice-age megafauna, such as mammoth and mastodon, eventually leading to extinction of more than 35 genera of animals across North America. Although disputed, some research suggests that Younger Dryas environmental changes led to a population decline among the Native Americans known for their distinctive Clovis spear points.

Conventional geologic wisdom blames the Younger Dryas on the failure of glacial ice dams holding back huge lakes in central North America and the sudden, massive blast of freshwater they released into the north Atlantic. This freshwater influx shut down ocean circulation and ended up cooling the climate.

Some geologists, however, subscribe to what is called the impact hypothesis: the idea that a fragmented comet or asteroid collided with the Earth 12,800 years ago and caused this abrupt climate event. Along with disrupting the glacial ice-sheet and shutting down ocean currents, this hypothesis holds that the extraterrestrial impact also triggered an “impact winter” by setting off massive wildfires that blocked sunlight with their smoke.

The evidence is mounting that the cause of the Younger Dryas’ cooling climate came from outer space. My own recent fieldwork at a South Carolina lake that has been around for at least 20,000 years adds to the growing pile of evidence. 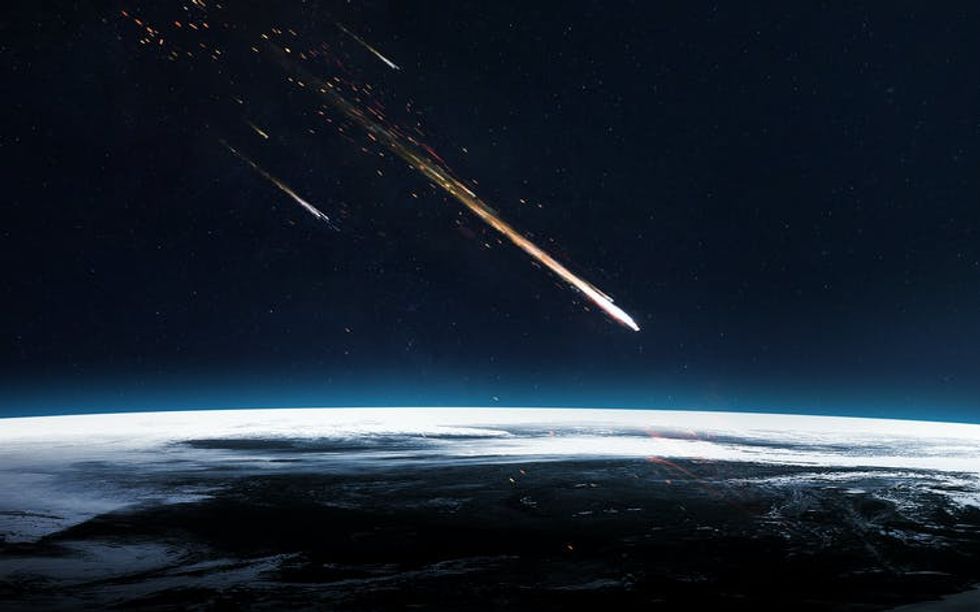 A collision from space would leave its mark on Earth.

What would an Earth impact leave behind?

Around the globe, scientists analyzing ocean, lake, terrestrial and ice core records have identified large peaks in particles associated with burning, such as charcoal and soot, right at the time the Younger Dryas kicked in. These would be natural results of the cataclysmic wildfires you would expect to see in the wake of Earth taking an extraterrestrial hit. As much as 10% of global forests and grasslands may have burned at this time.

Looking for more clues, researchers have pored through the widely distributed Younger Dryas Boundary stratigraphic layer. That’s a distinctive layer of sediments laid down over a given period of time by processes like large floods or movement of sediment by wind or water. If you imagine the surface of the Earth as like a cake, the Younger Dryas Boundary is the layer that was frosted onto its surface 12,800 years ago, subsequently covered by other layers over the millennia.

In the last few years, scientists have found a variety of exotic impact-related materials in the Younger Dryas Boundary layer all over the globe.

While many studies have provided evidence supporting the Younger Dryas impact, others have failed to replicate evidence. Some have suggested that materials such as microspherules and nanodiamonds can be formed by other processes and do not require the impact of a comet or asteroid.

White Pond has been part of this landscape for 20,000 years or more.

In the southeastern United States, there are no ice cores to turn to in the quest for ancient climate data. Instead, geologists and archaeologists like me can look to natural lakes. They accumulate sediments over time, preserving layer by layer a record of past climate and environmental conditions.

White Pond is one such natural lake, situated in southern Kershaw County, South Carolina. It covers nearly 26 hectares and is generally shallow, less than 2 meters even at its deepest portions. Within the lake itself, peat and organic-rich mud and silt deposits upwards of 6-meters thick have accumulated at least since the peak of the last ice age more than 20,000 years ago. 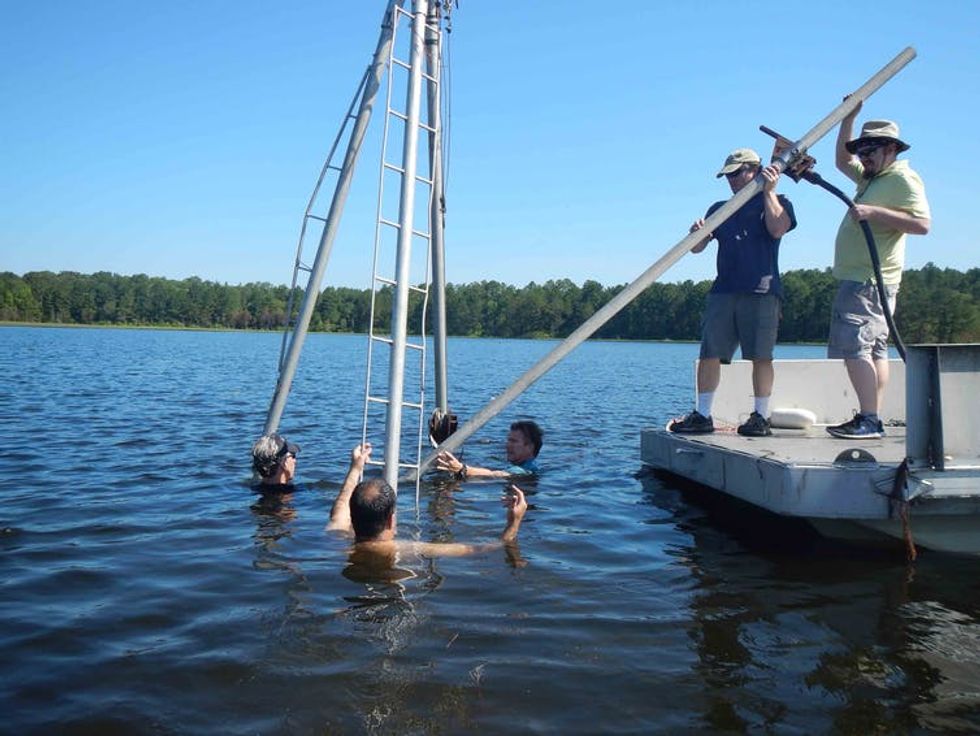 So in 2016, my colleagues and I extracted sediment from the bottom of White Pond. Using 4-meter-long tubes, we were able to preserve the order and integrity of the many sediment layers that have accumulated over the eons. 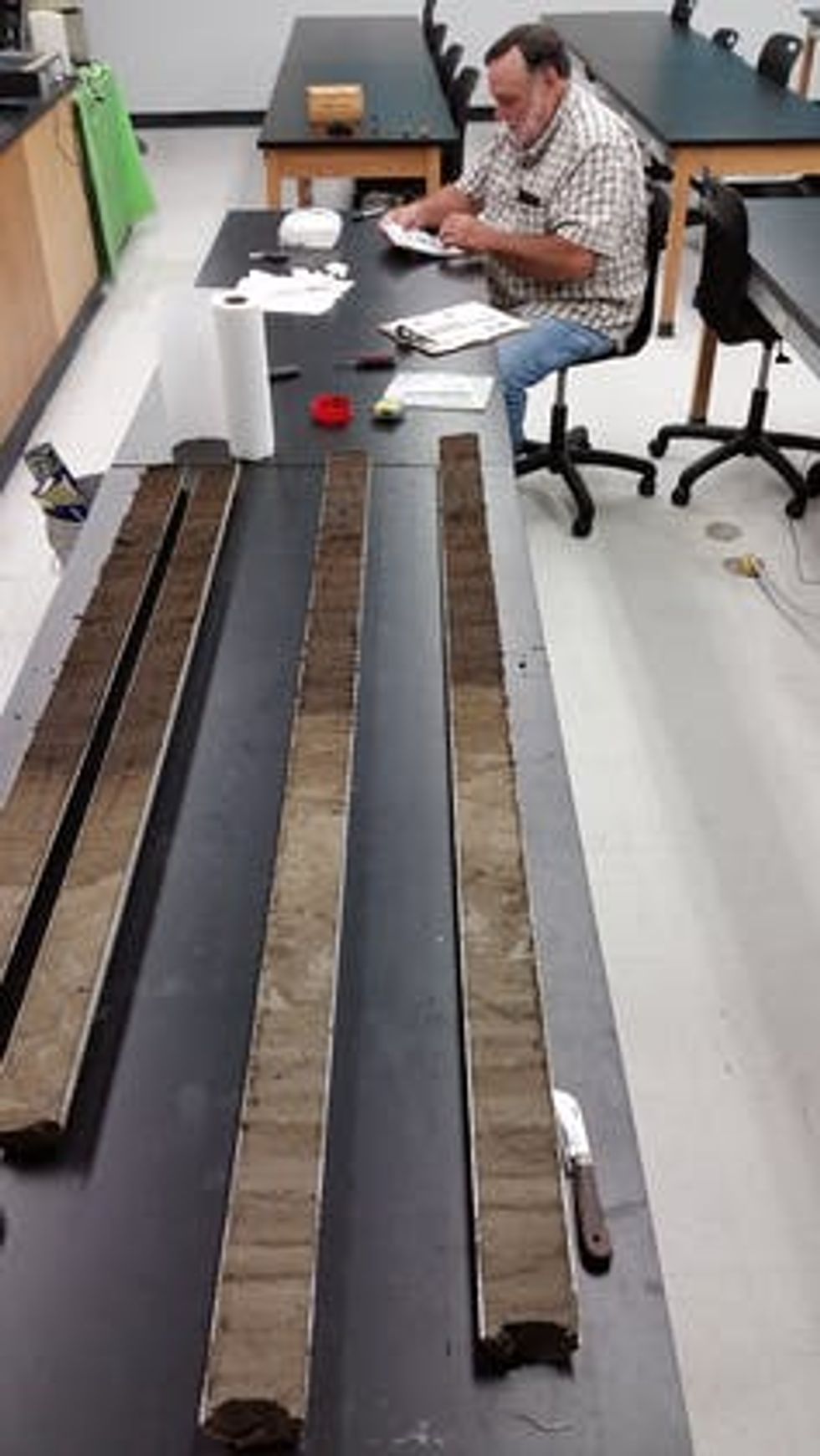 The long sediment cores are cut in half in order to extract samples for analysis.

Based on preserved seeds and wood charcoal that we radiocarbon dated, my team determined there was about a 10-centimeter thick layer that dated to the Younger Dryas Boundary, from between 12,835 and 12,735 years ago. That is where we concentrated our hunt for evidence of an extraterrestrial impact.

We were particularly looking for platinum. This dense metal is present in the Earth’s crust only at very low concentrations but is common in comets and asteroids. Previous research had identified a large “platinum anomaly” – widespread elevated levels of platinum, consistent with a global extraterrestrial impact source in Younger Dryas layers from Greenland ice cores as well as across North and South America.

Most recently, the Younger Dryas platinum anomaly has been found in South Africa. This discovery significantly extends the geographic range of the anomaly and adds support to the idea that the Younger Dryas impact was indeed a global event.

Volcanic eruptions are another possible source of platinum, but Younger Dryas Boundary sites with elevated platinum do not have other markers of large-scale volcanism.

More evidence of an extraterrestrial impact

In the White Pond samples, we did indeed find high levels of platinum. The sediments also had an unusual ratio of platinum to palladium.

Both of these rare earth elements occur naturally in very small quantities. The fact that there was so much more platinum than palladium suggests that the extra platinum came from an outside source, such as atmospheric fallout in the aftermath of an extraterrestrial impact.

My team also found a large increase in soot, indicative of large-scale regional wildfires. Additionally, the amount of fungal spores that are usually associated with the dung of large herbivores decreased in this layer compared to previous time periods, suggesting a sudden decline in ice-age megafauna in the region at this time. 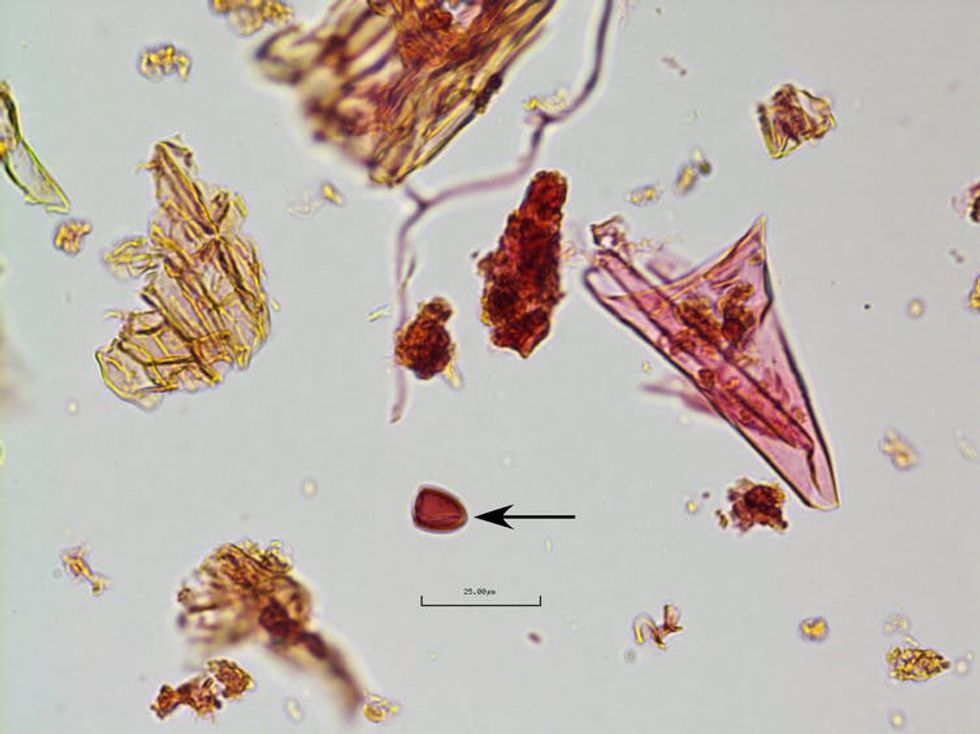 Photomicrograph of Sporormiella – fungal spores associated with the dung of megaherbivores – from White Pond.

While my colleagues and I can show that the platinum and soot anomalies and fungal spore decline all happened at the same time, we cannot prove a cause.

The data from White Pond are, however, consistent with the growing body of evidence that a comet or asteroid collision caused continent-scale environmental calamity 12,800 years ago, via vast burning and a brief impact winter. The climate change associated with the Younger Dryas, megafaunal extinctions and temporary declines or shifts in early Clovis hunter-gatherer populations in North America at this time may have their origins in space. 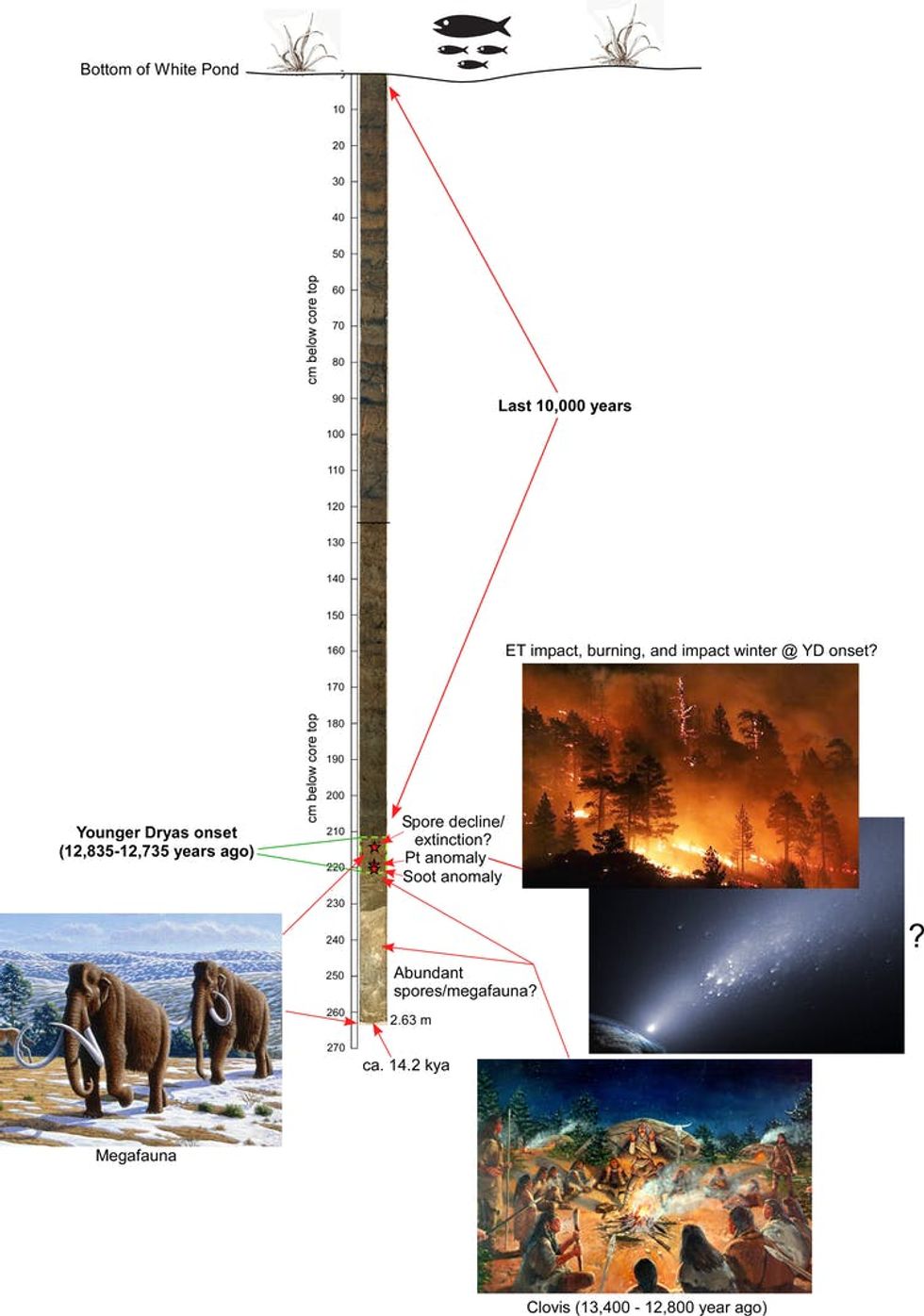 A White Pond sediment core is like a timeline of the stratigraphic layers. What researchers found in each layer provides hints of climate and environment at that time.