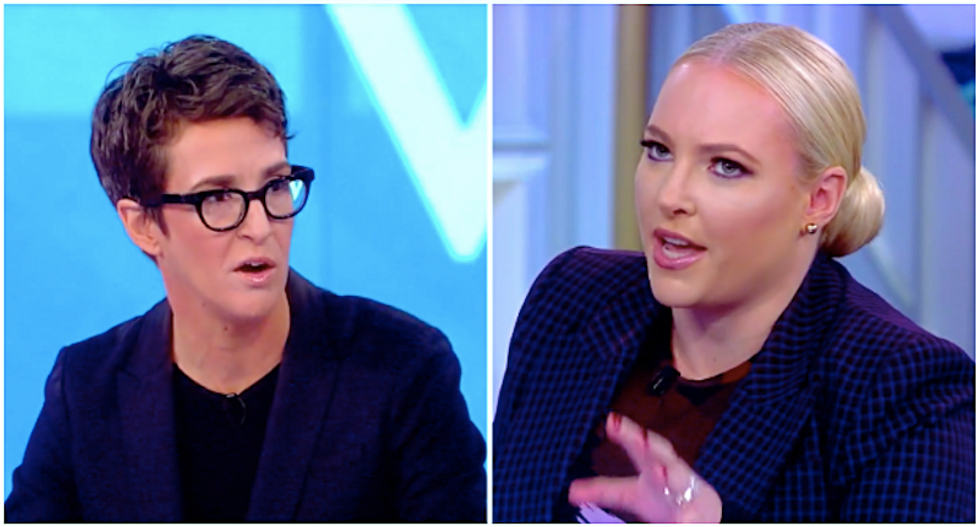 Conservative websites have seized on the revelation that Schiff, the House Intelligence Committee chairman, had been notified that a whistleblower was filing a complaint alleging abuse of power by President Donald Trump, and McCain pressed Maddow to explain.

"This was blowing up all over Twitter yesterday, at least conservative Twitter," McCain said. "It turns out that Adam Schiff knew about the whistleblower complaint in advance. The whistleblower spoke to a House aide about it, and then the aide told Schiff. Even if that's standard practice, when Schiff was recently asked directly, he said, quote, we have not spoken directly with the whistleblower. Now that's a lie, and I keep saying that Adam Schiff is the wrong person to do this because if we are going to go forward with impeachment, it needs to be as clean and look as nonpartisan as possible."

"He didn't speak with the whistleblower," she said. "Whistleblowers come forward all the time to the House Intelligence Committee, which is run by Democrats, and to the Senate Committee run by Republicans, and they say this happens all the time, we always do the same thing. We have them speak with a staffer, and then the staffer tells them to get a lawyer and file a whistleblower complaint. On the House side, they say this happens two or three times a month. This is a normal thing."

McCain and fellow conservative Abby Huntsman complained that Schiff had paraphrased the call summary as a dramatization of a mafia shakedown, but Maddow pushed back on their suggestion he was a partisan hack.

"He actually was reticent on impeachment," Maddow said. "As the head of the Intelligence Committee, he has been very much in the public eye on this stuff, but he's not been one of the people pushing for it."

Huntsman said she believes Trump's Ukraine scandal was worthy of an impeachment inquiry, but she asked Maddow if she hadn't contributed to the sense of outrage fatigue over all the president's previous scandals.

"I think it's a very good point," Maddow said. "That's what happens when you have a scandal-ridden presidency with stuff that happens all the time, that any other presidency, would have already led to impeachment."

She said the president committed an impeachable offense just before "The View" started taping.

"The president today, just before you guys got on the air today, the president went out on the South Lawn and he was asked, what did you want the Ukrainians to do?" Maddow said. "He said, I want them to investigate Biden and I want the Chinese to do it, too."

"Did this happen on the call?" she added. "Was it hearsay? Who was the whistleblower? He has just admitted to it on the South Lawn. You don't need an inquiry."