Rudy Giuliani a ‘person of interest’ after henchmen busted in Ukraine scheme: ‘Probably under surveillance’ 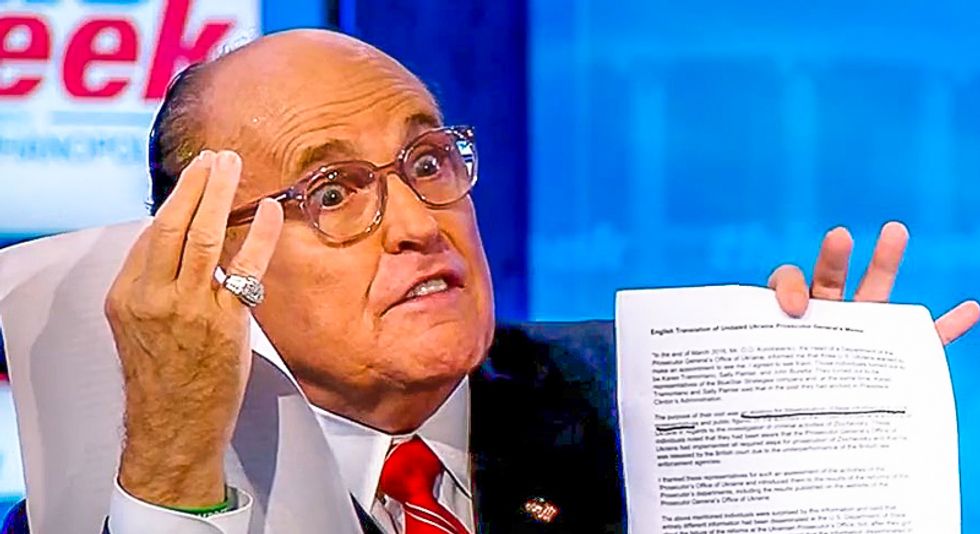 Rudy Giuliani's ties to two foreign associates are under scrutiny by federal investigators after the pair was arrested shortly before fleeing the country ahead of their congressional testimony.

Lev Parnas and Igor Fruman were among four men charged this week with funneling hundreds of thousands of dollars in foreign money into efforts to back President Donald Trump and other political candidates, and investigators are examining their close ties to Giuliani, reported Bloomberg.

A law enforcement official told Bloomberg that Giuliani's work for the pair was under investigation in an expanding criminal probe run by the U.S. Attorney's office he once ran in the Southern District of New York.

Giuliani has admitted that he pressed the Ukrainian government to investigate Joe Biden and his son, and the indictment alleges Parnas pressured a congressman -- identified as Texas Republican Pete Sessions -- to force out former U.S. ambassador Marie Yovanovitch in the midst of those efforts.

“The fact that they’re involved in illegal contributions and connected to things in Ukraine that Giuliani was involved in, that alone makes Giuliani a person of interest,” said Samuel Buell, a former federal prosecutor who now teaches at Duke University School of Law.

Parnas and Fruman had been expected to be questioned Thursday by House investigators, and Yovanovitch is scheduled to testify Friday on Capitol Hill.

The pair were arrested Wednesday evening at Dulles International Airport after buying one-way tickets to Frankfurt, Germany, hours after having lunch with Giuliani at the Trump hotel in Washington.

“How did the feds know, in real time, they were buying plane tickets?” said John Moscow, a former prosecutor in the Manhattan District Attorney’s office. “They were probably under surveillance.”

After the arrest, House Democrats subpoenaed the men's communications with Giuliani, who was planning to fly Thursday night to Vienna, where his now-indicted clients were traveling after getting a connecting flight from Frankfurt.