Syria is still a bewildering mess -- with or without the US 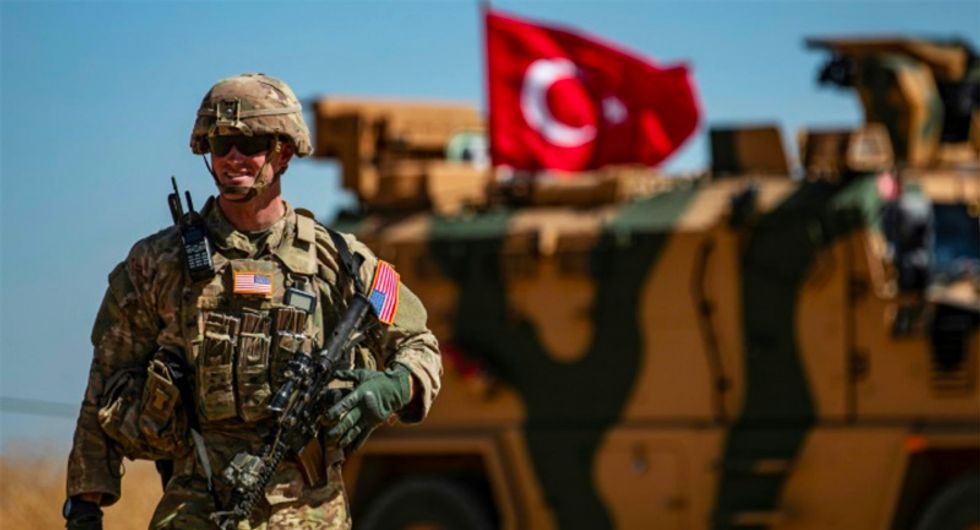 AFP/File / Delil SOULEIMAN US troops like this soldier pictured in the Syrian village of al-Hashisha on September 8 2019 number around 1,000 in total in Syria

Time was, conflict in the Middle East was complicated. Trump changed all that.

Given the betrayal of the Kurds as a result of the abrupt withdrawal of U.S. troops, ISIS prisoners on the loose and an alleged ceasefire with Turkish-funded fighter-bombers and jihadis that’s been shaky at best, one thing’s been clear: The mess in northeastern Syria is all Trump’s fault.

In 2019, maybe. Few, even in his own party, dispute Trump’s incompetence in Syria or in other global hot spots. Whatever the outcome of Trump’s volatile presidency, it’s unlikely he’ll spend his golden years lecturing on foreign policy to rapt audiences at Oxford, Cambridge or Harvard. It’s doubtful the much-ballyhooed (by him) killing of Abu Bakr al-Bagdadi on Oct. 27 in northwestern Syria will help Trump’s standing as a less-than-deft statesman.

Trump’s just the latest head of a colonial power to exploit, double-cross or screw over the natives of the Middle East. He’s heir to a super-shady tradition going back at least 100 years.

In the fog of anti-Trump fervor, however, a fantastically complicated narrative long shot through with propaganda from all sides is being distorted or at best simplified yet again—benefiting only those who profit from our forever wars. 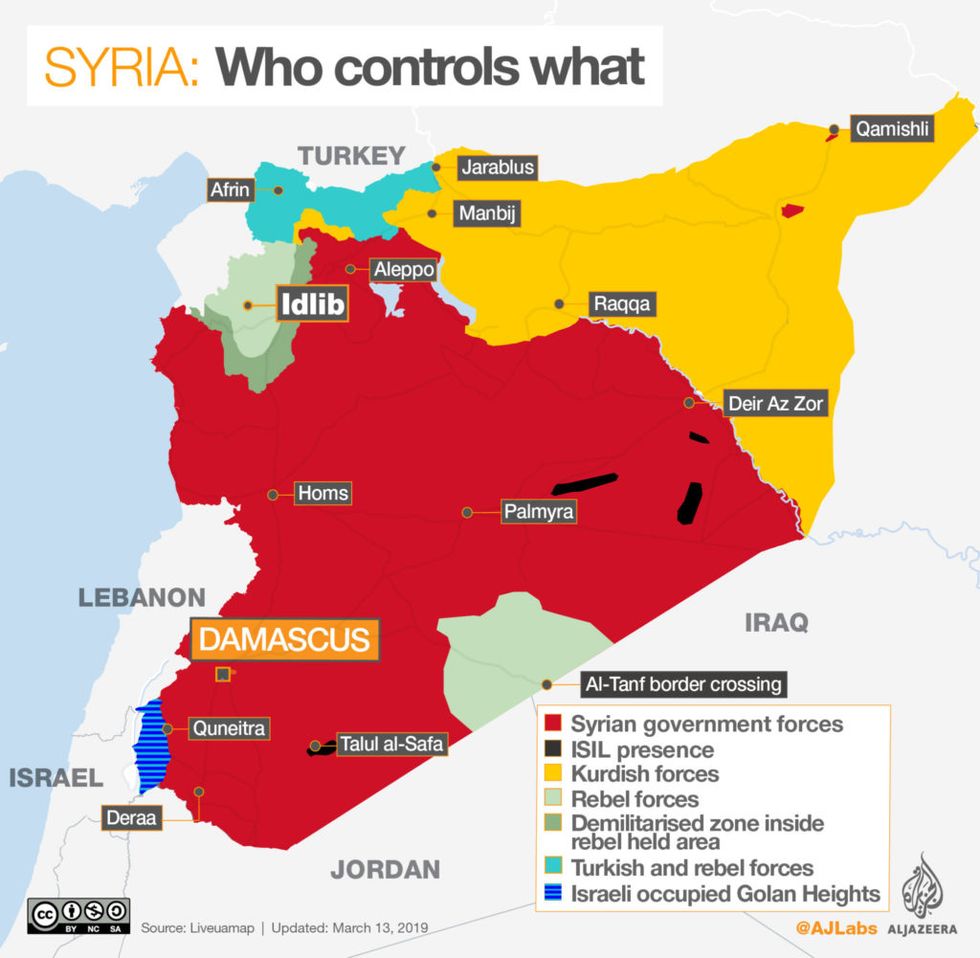 The truth? Trump’s just the latest head of a colonial power to somehow exploit, double-cross or screw over the natives in this region. He’s heir to a super-shady tradition going back at least 100 years in the Middle East. The then-secret Sykes-Picot Agreement, the infamous “line in the sand,” was drafted in 1916 by Britain and France. They crudely carved up the spoils of the Ottoman Empire into competing spheres of colonial influence without regard for the indigenous people.

Among other things, Brits and the French promised the Kurds, then the largest ethnic group in the world without a state of their own, an autonomous region as part of the post-war deal. A few years later they reneged, crushing the Kurdish dream.

Had it not been for ISIS loudly calling out Sykes-Picot at the birth of the caliphate and vowing to seize old territory in 2014, few Americans in this century would have known how egregiously Europeans remade the map of the Middle East.

President Obama, under whose aegis the U.S. illegally entered the Syrian civil war in 2013, has been canonized by the left—and the mainstream media—since Trump took office. His failed policies in Syria, which included secretly arming “moderate rebels” with ties to extremist groups including Al Qaeda at an estimated cost of $500 million in order to depose President Bashar al-Assad, have been forgotten—or never fully grasped—to begin with. Especially with the post-Trump halo, he’s been given.

“When the Arab Spring popped up we figured this was our latest chance in Syria. We partnered with people we normally would have considered enemies because we thought it was our chance to destroy Assad. We put aside the fact that these people were actually connected to al Qaeda and other jihadist groups.”

But even before Obama, there was Ellen De Generes’ good friend President George W. Bush. President Bush invaded Iraq in 2003 based on lies, enabling Abu Musab al-Zarqawi (later killed in 2006) to construct an Al Qaeda franchise deadlier than that created by Osama Bin Laden (killed in 2011), leading to ISIS.

“There would have been no Abu Bakr al-Bagdadi had Bush not invaded and occupied Iraq in 2003,” the Daily Beast reported Monday. “This history matters because it shows the expansive war the U.S. launched does not fight against a static enemy. It generates enemies—the slain al Qaeda propagandist Anwar al-Awlaki is another example—and provides opportunities for new ones to arise.”

Can anything stop “this history” from repeating? That’s doubtful, several analysts and historians told DCReport. They said one reason is that the cycle of wars in the Middle East lacks a cohesive media narrative like the one that fed the anti-war protests in the 1960s, helping end the Vietnam War in 1975.

A clearer, more objective, view of the U.S. military involvement in the Middle East and how it led up to Trump’s fateful troop pullout has been hampered by the closing of most foreign news bureaus over the past decade. Journalists who might once have been stationed in the Middle East now report on it from Washington D.C. or New York.

“In that environment, access and credibility depend on acceptance of official paradigms,” Kinzer wrote in 2016.

“Reporters who cover Syria check with the Pentagon, the State Department, the White House, and think tank ‘experts.’ After a spin on that soiled carousel, they feel they have covered all sides of the story. This form of stenography produces the pabulum that passes for news about Syria.”

Oddly, some of the biggest media outlets also rely heavily on just two people—both of whom could be perceived to have their own agendas and neither of whom are journalists—for crucial information coming out of Syria.

Rita Katz, an Iraqi-born Jew whose father was arrested and charged with spying for Israel and later executed in Baghdad, runs the Search for International Terrorist Entities or SITE Institute, from her home in Connecticut. Katz is often the first to issue announcements that ISIS has claimed responsibility for a terror attack—or the first to release beheading videos.

Rami Abdul Rahman runs the Syrian Observatory for Human Rights out of his home in Coventry, England, after fleeing his native Syria 19 years ago. Rahman’s organization tracks casualty figures and is considered a respected arbiter of who is behind the chemical weapon attacks inside Syria, an issue hotly-contested for years, most recently on the BBC last week.

Competing against and often calling out the brand-name reporters, as well as Katz and Rahman, are independent journalists who are often accused of being Russian apologists or on the payroll of Syrian President Bashar al-Assad. They range from respected but controversial reporters like the Pulitzer Prize-winning Glenn Greenwald and former CBS investigative reporter Sharyl Attkisson—to lesser-knowns such as Vanessa Beeley and Eve Bartlett who actually report from Syria, but are accused of being there on behalf of Assad.

One independent journalist, Beirut-based Rania Khalek, broke down the Kurdish issue better than almost anyone last month but it’s likely only her Twitter and Youtube followers saw it.

Compared to the days when veteran trench-coated correspondents reported from overseas on one of just three networks or a handful of prestigious, big-city dailies, news from the Middle East is now a convoluted, partisan, free-for-all.

Not surprisingly, then, Westerners who don’t know Raqqa from Rio have been wringing their hands over headlines about the pitiful, abandoned Kurds ever since Trump’s decision to pull troops from Syria last month. Though they are a tough, shrewd and perpetually stateless tribe who’ve done what they’ve had to do—including terrorism—to survive in hostile territory for centuries, they’ve been reborn as heroic and wronged victims thanks to Trump.

The Kurds have never had it easy. They’ve been imperiled, said one analyst, for the past 1,000 years of their 2500-year known history, and they go to who they think is their best ally at that moment. Since 2011 it was the Americans, now they’re hoping Assad—and by extension, Vladimir Putin—will protect them.

“Instability is very stable,” Gérard Gautier of the Kurdish Institute of Paris told DCReport.“The people in these regions have all agree they don’t want the Kurds around for years, for centuries. But the Kurds are landlocked, a stateless people trapped between these big players that have nowhere to go. So they keep fighting and they ally themselves with those they think can help them at the time.”

If Syria is confusing enough; the Kurdish issue is even more so.

The pro-Kurd group PKK, or Kurdistan Workers Party, was established in Turkey in the mid-1970s by left-wing Kurdish students led by the charismatic Turkish-born Kurd Abdullah Ocalan. They were seeking, then as now, an independent Kurdish state, and waged four decades of terror against Turkey trying to get it. Ocalan was an anti-capitalist who credited the anarchic philosophies of Bronx-born Murray Bookchin, of all people, a libertarian socialist and a pioneer of the ecology movement, with helping formulate his beliefs.

The PYD, created in 2001 in Syria was an offshoot of the PKK, and was so influenced by Ocalan that his photos are still all over PYD facilities in northeastern Syria. The PYD’s military arm, the YPG and YPJ, included female fighters, another idea that came directly from Ocalan’s socialist-democratic beliefs. The SDF was the official paramilitary unit formed to be boots on the ground for the U.S. in the fight against ISIS. The SDF was literally a motley crew that included Syrian Kurds from the PYD, as well as Syrian Arabs and Turks.

If you’re lost in that alphabet soup of Syrian geopolitics, you’re not alone. Therein lies the problem. And it gets worse. The Turkish-sponsored “Arab militias” now threatening to take over northeastern Syria and drive out the Kurds are called the TFSA, or Turkish Free Syrian Army, but they include members of the FSA, or Free Syria Army from Syria, who were Arab militants trained and for awhile controlled by the U.S. under Obama.

“Terrorism is now squarely in the eye of the beholder,” wrote Seumas Milne in the Guardian in 2015,” and nowhere is that more so than in the Middle East, where today’s terrorists are tomorrow’s fighters against tyranny—and allies are enemies—often at the bewildering whim of a western policymaker’s conference call.”

Independent journalist Mark Ames, a vocal opponent of stories by more brand-name reporters, was less gracious when summing up what he—and others—see as the hypocrisy at the heart of what Americans are told about Syria—and by extension the rest of the Middle East, going back decades.

“Magically before our eyes, the same groups that our media called "Syrian rebels" or "Free Syrian Army" for 8 straight years have been rebranded as "Arab militias" who are all Turkey's fault,” Ames wrote on Twitter.

“Like, we never even met these assholes—just armed & trained & PR'd them is all.”