The View's Abby Huntsman blurts out-of-nowhere denial to Rachel Maddow: ‘My dad is not the whistleblower’ 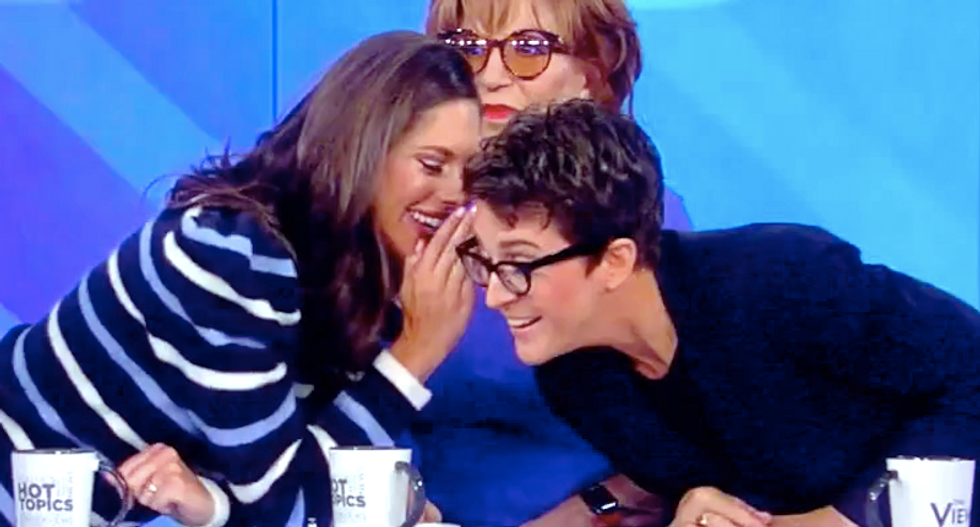 MSNBC's Rachel Maddow appeared Thursday on "The View," where she sparred with Megan McCain and prompted an out-of-nowhere denial from Abby Huntsman about her ambassador father.

The liberal broadcaster was discussing her new book, "Blowout," about the oil industry fueling the corruption of democracies around the world, when she praised McCain's father for pinpointing the issue behind Russia's corruption.

"When your dad came back from Ukraine in 2014, as the Ukrainian people were rising up to throw out their dictator," Maddow told McCain, "Russia invaded Ukraine and took part of them, and (Sen. John McCain) came back and he said, Russia is a gas station masquerading as a country."

"That was the first time he sort of introduced that, and stuck with it," she continued. "I thought, that's interesting. What is he saying about Russia's economy, and Russia and oil and gas that explains their bad behavior here? It always just stuck with me, and I ended up digging into it. Why is Russia throwing all these wild pitches, including the pitch that they threw at us in 2016, and your dad was right."

"They have this economy that depends on one thing," Maddow added, "and it's a bad idea to base your economy on oil and gas, and when you are Vladimir Putin and that's all you have, you try to use it as a weapon around the world. That's what they did to Ukraine, and that's what they have done to Western Europe, and it makes them into a weird country that behaves poorly, and the gas and oil industry has enabled it in a way."

She then moved on to the intertwining scandals that were probed in the Mueller report and have launched an impeachment inquiry, after a whistleblower revealed President Donald Trump's corrupt request of his Ukrainian counterpart.

"For everything that happened with the Mueller report, all the scandal about this, and about impeachment, I do think Russia explains a lot of what is going on," Maddow said, "including behind this impeachment thing."

Huntsman then interrupted, as host Whoopi Goldberg tried to usher the show into a break, with an unsolicited comment about her father Jon Huntsman, who resigned as the Russian ambassador Aug. 6, as top intelligence officials abruptly left the administration and six days before a whistleblower complaint was filed.

"By the way," Huntsman said, "my dad is not the whistleblower."

Maddow asked if Thursday was his last day in the State Department post, and Huntsman, who has been uncharacteristically outspoken in her belief that Trump's actions toward Ukraine were impeachable, said her father was flying home as they spoke.

"Have you talked to him about why he quit?" Maddow asked.

Huntsman grinned and motioned for Maddow to lean toward her, where she pretended to whisper a secret in her ear.

"Just come back," Goldberg said, as Maddow and the audience laughed. "Come back and hang."