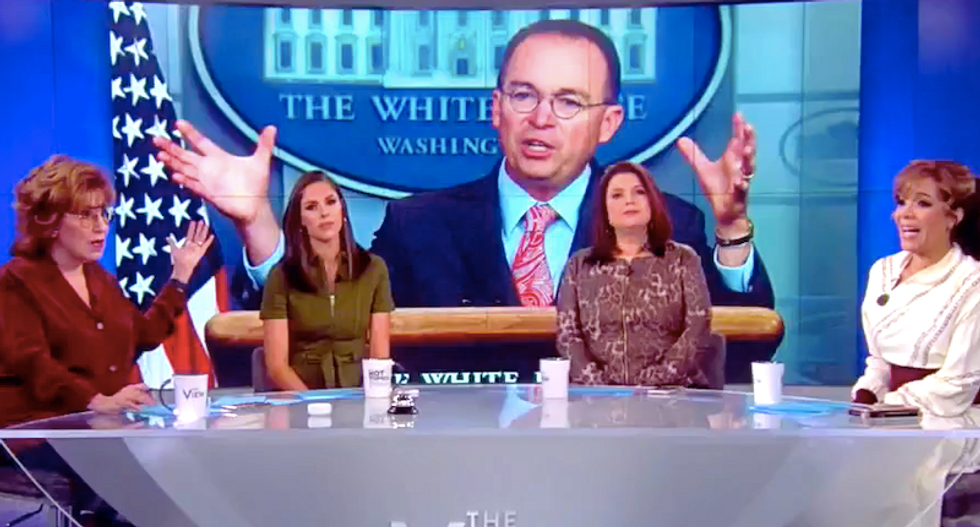 The audience on "The View" reacted in anger and then mockery to White House acting chief of staff Mick Mulvaney's confession to Ukraine quid pro quo -- and then his denial of what he plainly said on video.

President Donald Trump's chief staffer admitted during a press briefing that the White House held up congressionally approved aid to Ukraine as leverage to get the foreign ally to investigate a debunked conspiracy theory.

"We do that all the time with foreign policy, and I have news for everybody," Mulvaney told reporters. "Get over it. There is going to be political influence in foreign policy."

The audience booed, and the co-hosts were astonished.

Host Joy Behar then reported that Mulvaney tried to walk back his public claims, denying that he had admitted to a quid pro quo arrangement and suggesting that he had been misquoted.

"He tried to walk it back saying there was no quid pro quo and blame the media for misconstruing his statement, but you just heard him," Behar said, as the audience and panelists laughed. "You heard him. He has just basically handed the impeachment over to the Democrats."

"The people that are around the president right now, a lot of them are buffoons," she said. "They act like such idiots when they're talking."

She highlighted the president's personal attorney Rudy Giuliani as a perfect example, and she said the former New York City mayor had gotten himself under criminal investigation.

"Lock him up," Behar said, as the audience thundered in approval. "Lock him up."