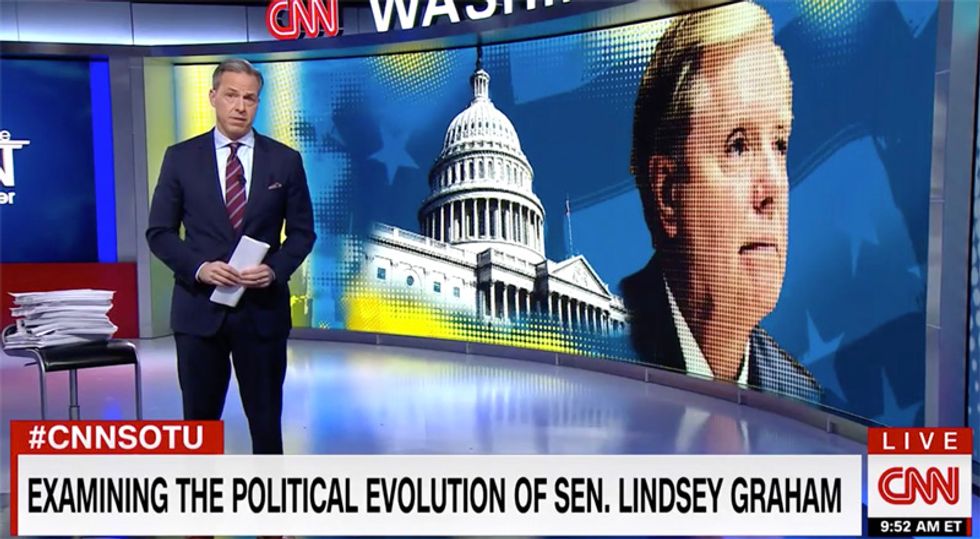 State of the Union host Jake Tapper used his closing comments on Sunday morning to call out Sen. Lindsey Graham (R-SC) for failing to do his job and look at the facts that have been revealed about President Donald Trump following the release of a whistleblowers complaint.

Standing before a large video screen, displaying some of Graham's comments in defense of the president, the CNN host implored the Senate Judiciary Committee chairman to do his job.

With a massive stack of House impeachment inquiry transcripts stacked up on a chair next to him, Tapper first stated that Graham passed on appearing on his show, before calling the GOP's senator's comments on Trump both "jarring" and "confusing."

“We now have reams of evidence,” The CNN host continued. “Testimony from multiple Trump administration diplomats and national security officials current and former suggesting that outside that phone call, Ambassador Gordon Sondland, Rudy Giuliani, acting White House Chief of Staff Mick Mulvaney all were pushing Ukraine to investigate the Bidens if they wanted that aide in that White House meeting.”

Taper went on to compare Graham's refusal to look at the evidence arrayed against Trump to former Congressman Earl Landgrebe (R-IN) who famously said during the Watergate hearings, "Don’t confuse me with the facts.”