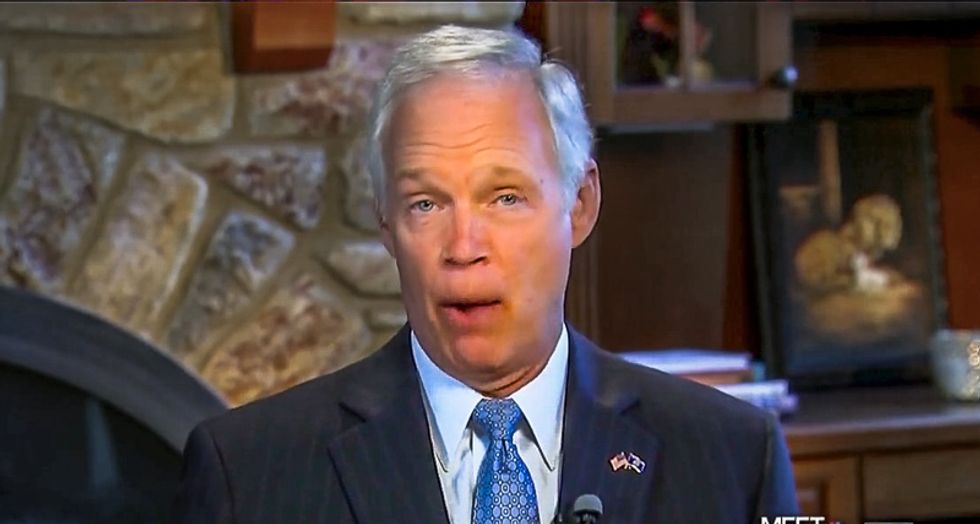 Sen. Ron Johnson -- who's more deeply involved in the Ukraine scandal than any other lawmaker -- insists there's no reason for him to recuse himself from voting on impeachment.

The Wisconsin Republican, who chairs the Senate Foreign Relations Committee’s panel on Europe, has been so engaged in Ukraine matters that he could be called as a fact witness in the impeachment inquiry, reported The Daily Beast.

He's been so involved, in fact, that Reps. Jim Jordan (R-OH) and Devin Nunes (R-CA) -- two of President Donald Trump's strongest congressional allies -- asked him to provide his recollection of what took place with Ukraine.

He sent a lengthy letter to House Republicans detailing his private conversations with Ukraine's president Volodymyr Zelensky and EU ambassador Gordon Sondland, and he also questioned the credibility of Lt. Col. Alexander Vindman, a National Security Council staffer who will testify Tuesday about Trump's phone call that prompted a whistleblower complaint.

“A significant number of bureaucrats and staff members within the executive branch have never accepted President Trump as legitimate and resent his unorthodox style and his intrusion onto their ‘turf’,” Johnson wrote. “They react by leaking to the press and participating in the ongoing effort to sabotage his policies and, if possible, remove him from office. It is entirely possible that Vindman fits this profile.”

Johnson was hooked by conspiracy theories involving Ukraine promoted by the work of John Solomon, whose opinion columns are currently under review by his former publisher The Hill -- and the senator continues to promote his writings.

“I don't think there's a need for further investigation out of Ukraine, anyway,” Johnson said. “I mean, the investigation here is going to shift in the U.S. Just read anything by John Solomon, who’s probably doing most of the groundwork on this. Take a look at what he’s been doing and what he’s gonna be coming up with.”

Johnson believes the president had legitimate concerns about corruption in Ukraine, and he "winced" upon learning about a possible quid pro quo arrangement involving military aid he strongly supported.

The senator personally tried to alleviate concerns of Ukrainian officials about the withheld aid by urging Trump to authorize him the hold was released, but he said the president wouldn't do it.

Johnson has steadfastly refused to consider recusing himself if and when impeachment reaches the Senate floor, and House Democrats who have read the senator's letter are furious.