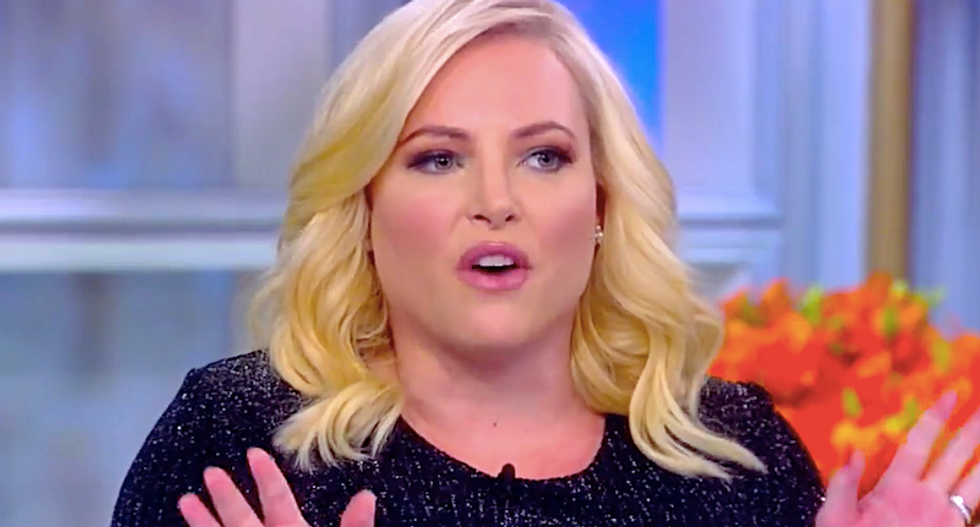 "The View" co-host Meghan McCain exploded after her fellow panelists criticized Rep. Will Hurd (R-TX) for signaling he would not support impeachment for President Donald Trump, despite the testimony placing him at the center of an apparent extortion scheme against Ukraine.

The conservative McCain pointed out that independents had lost support for impeachment since hearings began, and she played a clip of Hurd explaining why he didn't believe the evidence supported impeachment -- and her co-hosts wondered if he had heard the testimony.

"I think the point of the show is we live in a world where every panel has a different view," McCain said. "I also lived in Virginia -- Trump MAGA hat people everywhere -- and there are people in this country, and congresspeople like Mike Turner who are not convinced what happened."

"Democrats have gotten out over their skis so many times," she added. "I remember coming on this show last year thinking (Robert) Mueller had this locked and loaded. Lock him up, put him in handcuffs, this is done. But the problem is there is a distrust, including from people like me, of who to believe at this point. He's going to jail and getting impeached and for Republicans, it doesn't matter because impeach the motherf*cker thing on Election Night?"

Co-host Sunny Hostin pointed to the Constitution, and McCain claimed she kept a copy on her nightstand, but her colleague brushed that aside.

"The Constitution belongs to all of us whether we have it on our nightstand or not," Hostin said. "In the Constitution -- you can correct me -- I believe bribery is listed as one of the impeachable offenses by the founding fathers."

McCain objected, saying that Hurd had served in the CIA -- but Hostin wasn't finished.

"I will also say that it tells me that he is complicit, the Republican Party has enabled this president," she said, as McCain and co-host Abby Huntsman protested, "continues to enable this president."

"You're slandering a CIA agent," she said.

"He heard evidence clear and simple and for him to sit there and say that he -- the evidence has to be overwhelming and that he heard no overwhelming evidence," she said. "I want to know which hearings he was sitting at. That's what I think."

The audience cheered in agreement, and that only made McCain angrier.

Hostin denied her statement was a cheap applause line, and McCain complained again.