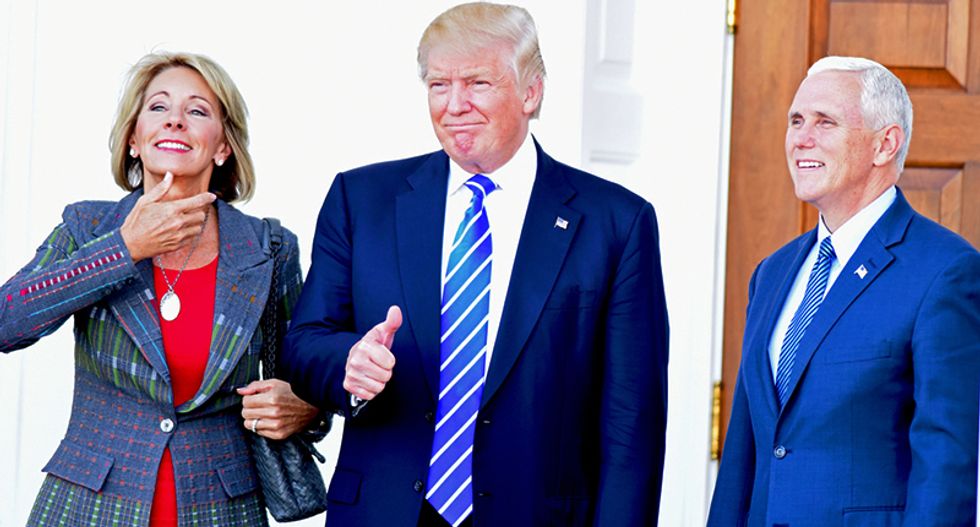 Controversial Secretary of Education Betsy DeVos was threatened with jail time and received a $100,000 fine for illegally trying to collect student loan payments from victims of scam colleges.

According to a new report in The New York Times, she's still trying to violate the federal judge's order that resulted in her being held in contempt of court.

"Thousands of students who took out federal loans to attend schools that lured them with fraudulent claims will still have to repay a portion of their debts, the Education Department said Tuesday — a new attempt to water down a loan-forgiveness program that the department’s leader has long deplored," the newspaper reported.

"The change creates a complicated sliding scale on which defrauded students’ relief is calculated using group earnings data. Debts will be fully forgiven only if students in a particular program earned far less than those from similar programs at other schools," The Times explained.

"The policy change will almost certainly be challenged in court by borrowers, who have already beaten back one attempt by Ms. DeVos to enact partial forgiveness," the paper noted. "Ms. DeVos sought in 2017 to reduce the relief offered through the rule known as 'borrower defense to repayment,' which allows the former students of schools that broke laws to seek forgiveness of their federal student loans. A federal court blocked that effort, saying the department’s method for determining how much relief to grant applicants illegally misused individual income data obtained from another federal agency."

“Under law, cheated students have the right to have their loans fully canceled,” Connor said. “This partial denial scheme will force thousands of families to pay fraudulent debts that never should have existed in the first place.”

A group of students also blasted DeVos in a public letter (PDF).

"Your Department continues to refuse to follow the law and cancel the loans of more than 200,000 students who were defrauded by for-profit colleges and have pending borrower defense applications. You have the power and legal obligation to cancel those loans right now in their entirety," the students wrote. "These actions are even more upsetting because student voices have not been involved in the process. Meanwhile, the for-profit college industry had seats at the table every step of the way. You currently employ multiple former executives from for-profit colleges."