Here are 5 findings from an analysis of Trump's Twitter addiction

President Donald Trump has helped propel himself to infamy with under 300 characters. As the decade comes to a close, Washington Post reporter Philip Bump did 10 years' worth of Twitter analysis from Trump's first tweet about "The Apprentice" in 2010 to his recent attacks on his impeachment.

1. How his following has evolved -- and with it the topics he addresses.

"His Twitter presence has evolved along with his personal position, with that 'Apprentice' tweet getting 27 retweets and his disparagement Sunday of House Speaker Nancy Pelosi garnering more than 34,000 (as of writing)," Bump explained.

Then, Trump had just 27,500 followers, while today he boasts more than 68 million, with arguably more Russian followers than in 2010 as well.

Before Trump began running for president in 2010, Bump showed a shocking chart that revealed the president never questioned the legitimacy of the news media. It was only after he announced he was running that the word "fake" saw a substantial increase. 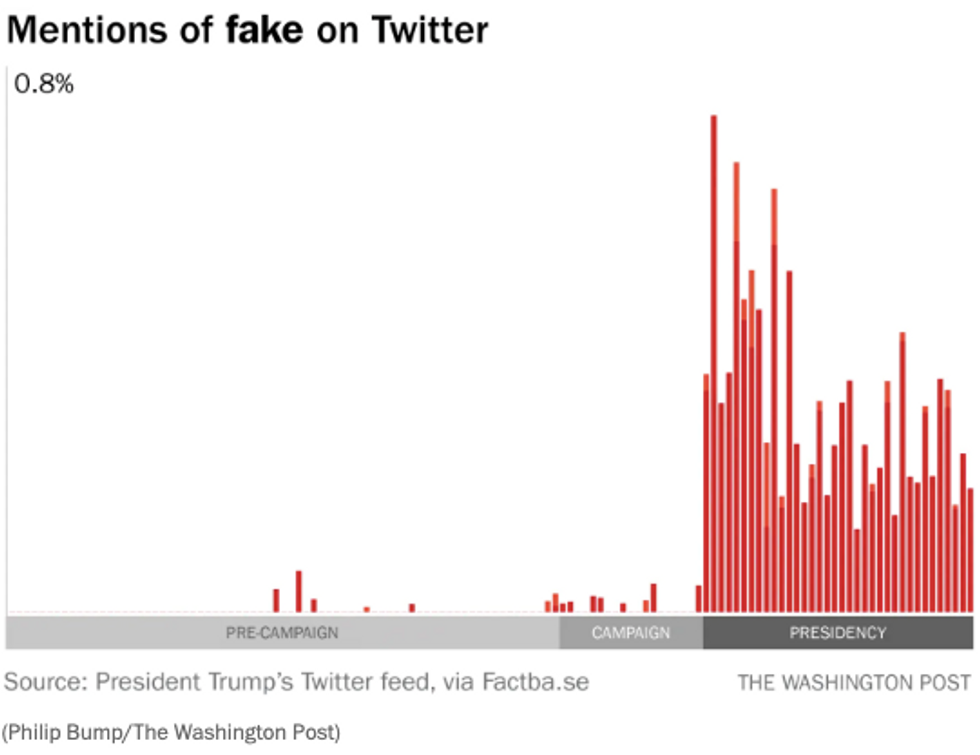 The same could be said for his use of the word "witch hunt" and "Russia."

Trump's comments about his show once accounted for 5 percent of the words used in his tweets, but after he ran for president, that was overtaken by other concerns, like conspiracy theories about Hillary Clinton and other Democrats.

Bump created a search box that allowed anyone to be able to find mentions of specific topics on the story's site.

3. Whatever the issue -- the most important thing to Trump is Trump.

"The regularity with which Trump mentioned his own name in tweets has dropped off since the campaign. Before his decision to run, he would often tweet his own name as part of his branding efforts: visit Trump Hotels, that sort of thing," wrote Bump. "During the campaign, he would promote his candidacy. Since? Relatively less."

The analysis noted that Trump's promotion of his properties extended to his golf addiction, which also allowed a convenient foray into former President Barack Obama.

4. Trump's opinions and priorities flipped from when Obama was in office to his own presidency.

During the Obama administration, Trump was overcome with anxiety about the national debt and deficit. That has obviously evolved to Trump stacking up so much debt that the deficit reached new heights under his leadership.

Similarly, Trump only seemed to care about immigration issues after he announced he was running for president. The chant "build that wall," came from former advisers Roger Stone and Sam Nunberg. His former campaign manager, Steve Bannon, liked the idea to help Trump remember that he needed to discuss immigration as a key campaign issue.

"Before the campaign, he mentioned immigration (or immigrants) relatively infrequently," wrote Bump, showing a bar-graph of the uptick. "After, it came up more regularly."

5. As his presidency progresses -- the more he attacks Democrats.

While many presidents move to be more inclusive and bipartisan when elected, Trump has opted to attack Democrats and any Republican who dares to disagree with him. Bump explained that the regularity with which he mentions the parties has increased dramatically since he took office.

To see the charts and graphs and read the full analysis, check out The Washington Post.