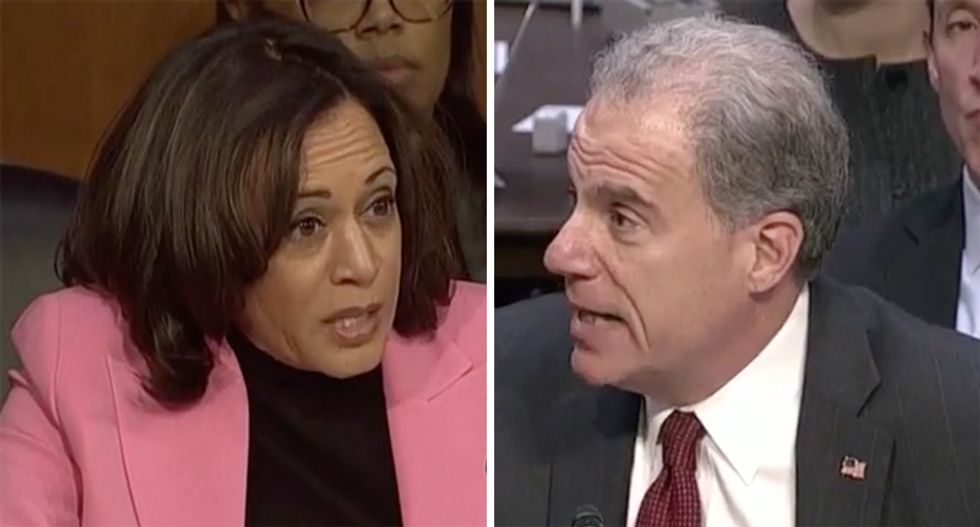 Sen. Kamala Harris connected the dots between Rudy Giuliani and attempts to prevent the Department of Justice from prosecuting a Ukrainian billionaire.

Harris, who was San Francisco District Attorney and California Attorney General prior to joining the U.S. Senate, put her experience as a career prosecutor to use while questioning DOJ Inspector General Michael Horowitz before the Senate Judiciary Committee.

"So it was recently reported that the president's personal attorney, Rudy Giuliani, asked Ukrainians to help search for dirt [on] the political rivals of the president. In exchange for the help, Giuliani offered to help fix criminal cases against them at DOJ," Harris noted.

Harris brought up the case of Ukrainian billionaire Dmytro Firtash, who is fighting extradition to the United States while on home arrest in Austria while out on a $172 million bond.

"Giuliani and his associates -- two of whom have been indicted and are now in federal custody -- allegedly reached out to a Ukrainian energy tycoon, who faced legal problems in America. In exchange for helping find dirt on the president's political rivals, Giuliani's associates reportedly connected the Ukrainian with lawyers who could get a top-level meeting at the United States Department of Justice," she explains.

"In essence, Giuliani's scheme was an attempt to trade get out of jail free cards for political favors," Harris said. "As part of Giuliani's plan, Attorney General Barr met with the Ukrainians' lawyers, who asked that the Department of Justice withdrawal evidence in the tycoon's bribery prosecution."

"Earlier today, you said you are not investigating matters related to ongoing Ukraine issues, does that mean that you have decided not to investigate these incidents?" she asked.

"No," Horowitz replied. "As I think mentioned in a recent letter and I've been in touch with fellow IGs who have been asked by members to look at those issues, we've been in communication with each other."