Nancy Pelosi earns applause with powerful call to impeach Trump: ‘The president is an ongoing threat to national security’ 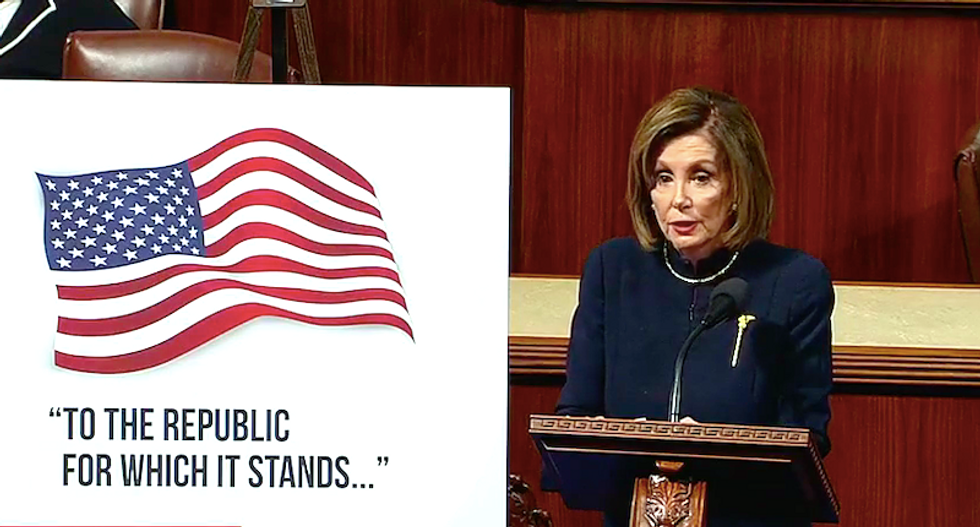 The California Democrat opened her speech by reciting the Pledge of Allegiance, then laid out the evidence against the president and invoked the memory of the late Rep. Elijah Cummings to urge lawmakers to support impeachment.

"If we do not act now, we would be derelict in our duty," Pelosi said. "It is tragic that the president's reckless actions make impeachment necessary. He gave us no choice. What we are discussing today is the established fact that the president violated the Constitution."

"It is a matter of fact that the president is an ongoing threat to our national security and the integrity of our elections, the basis of our democracy," she added. "Hundreds of historians, legal scholars and formal prosecutors, regardless of party, have stated that the president committed impeachable offenses. Since today is a national civics lesson, though a sad one, I submit these documents for the record and commend them for students to study."

She then invoked the memory of Cummings, who passed away in October and commanded bipartisan respect, to remind Republican lawmakers of their constitutional duties.

"As our beloved chairman Elijah Cummings said when announcing support for this action, 'When the history books are written about this tumultuous era, I want them to show that I was among these in the House of Representatives who stood up to lawlessness and tyranny,'" Pelosi said. "He also said, almost prophetically, 'When we are dancing with the angels, the question will be what did we do to make sure we kept our democracy intact?'"

"Elijah, as you know, has since passed on," she added. "Now he is dancing with the angels, and I know that he and all of us here are very proud of the moral courage of those members who want the honor the sacrifice of our men and women in uniform to defend our republic and the aspirations of our children to live freely within it. Today we are here to defend democracy for the people. May God bless America. I yield back the balance of my time."