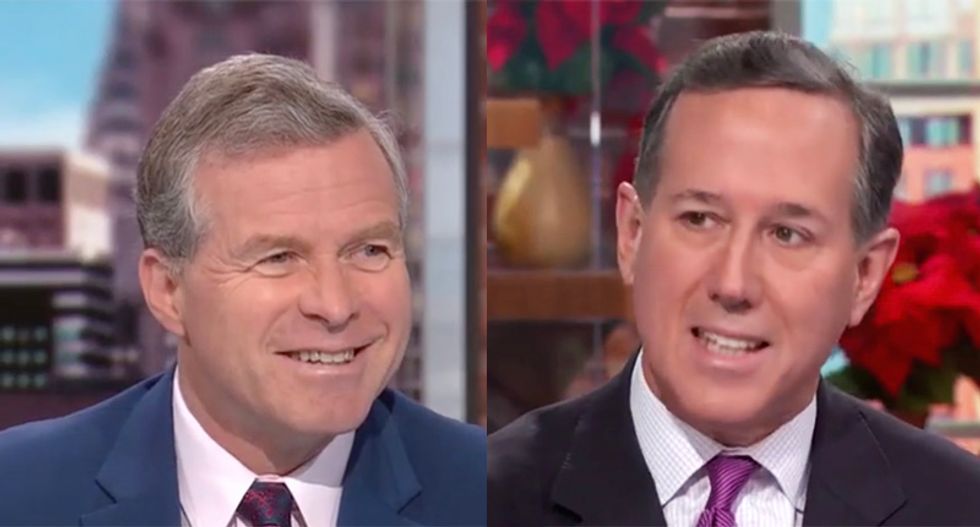 Sitting down with "New Day" host John Berman, Santorum once again attempted to make the case that the president was withholding aid over Ukraine corruption and not because he was seeking dirt on political opponents -- and didn't fare well as Berman kept fact-checking him.

With the two former GOP lawmakers on split-screen, Santorum refused to concede that the president was asking for a personal favor during the phone-call that eventually led to a House impeachment inquiry into the president's actions.

"He [Trump] said 'I want you to do us a favor though.' When somebody asks me for a favor, I typically think they want a favor," Berman pressed to Dent's amusement.

"He said I'm concerned about corruption and how it might affect the elections. He talked about 2016, that's what he talked about," Santorum replied.

"But after -- but he asked for the favor after Zelensky made a request for the Javelins, the anti-tank weapons," Berman shot back. "He said 'I need a favor though.' That was the issue."

Attempting to talk over the CNN host, Santorum brought up "investigating the 2016 election," as Berman persisted.

"Again, after Zelensky brought up the issue," Santorum attempted, as Dent once again smirked.

Later Santorum conceded that what Trump did was "inappropriate," but maintained that it was not impeachable.