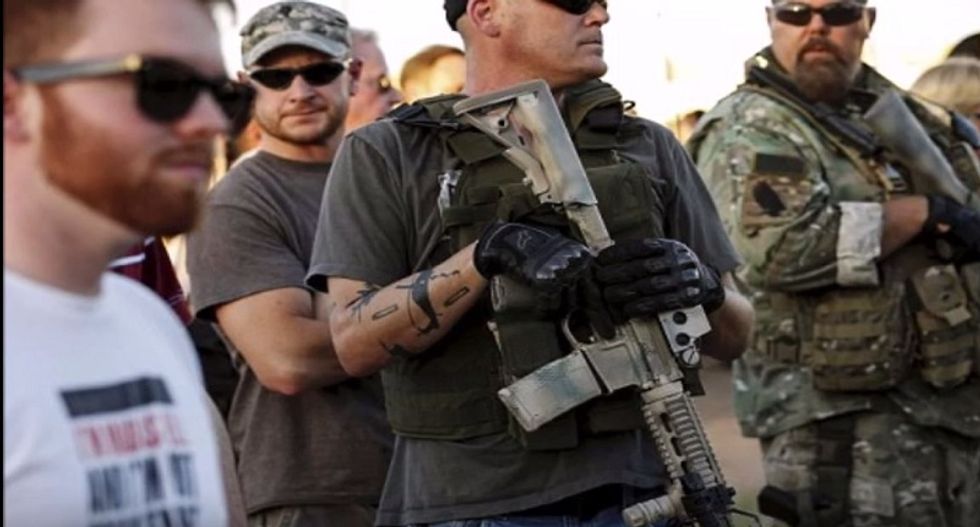 Armed anti-Muslim protesters in Phoenix in May (Screenshot/YouTube)

Emily Gorcenski was pepper-sprayed by Christopher Cantwell -- known as the "Crying Nazi" -- at the fatal 2017 "Unite the Right" rally in Charlottesville, Virginia. Since then, she's used her internet research skills to identify far-right extremism.

"I’m not letting up on the Matt Shea domestic terror situation, because it is directly relevant to something about to happen in Virginia, next month, on January 20," Gorcenski posted on Twitter.

Shea, a Republican state representative in Washington, was exposed for supporting domestic terrorism in a report compiled by the legislature.

"Many of the same militant organizations are planning an armed gathering in Richmond, VA to protest, with threat of civil war, proposed gun control bills in the Virginia Legislature," she explained. "Many of these groups are chapters of the same nationwide patriot militia movement: the Three Percenters, the Oathkeepers, and others. Several of these groups who plan to attend were also part of the armed contingent that attended Unite the Right in Charlottesville in 2017."

Gorcenski issued the warning despite agreeing with militia organizers on the policy of many of the bills.

"I’m not gonna lie: many of the proposed gun control bills are very, very bad. And I myself would protest them, for many reasons. But the appropriate form of protest is not threatening a civil war and showing up armed en masse," she noted.

"These organizations are linked to multiple acts of terrorism and are once again threatening to use lethal force to intimidate an American city and a state government to serve political motivations," Gorcenski warned. "Many of these militant groups are sharing, manipulating, and amplifying deliberately false rhetoric about what is happening. This is a coordinated reaction to Virginia falling to Democratic control."

"We cannot talk about fake news and politics without also talking about political violence and hate. They are two sides of the same coin," she explained. "We can, however, eradicate white supremacist and far-right domestic terror. And we must."