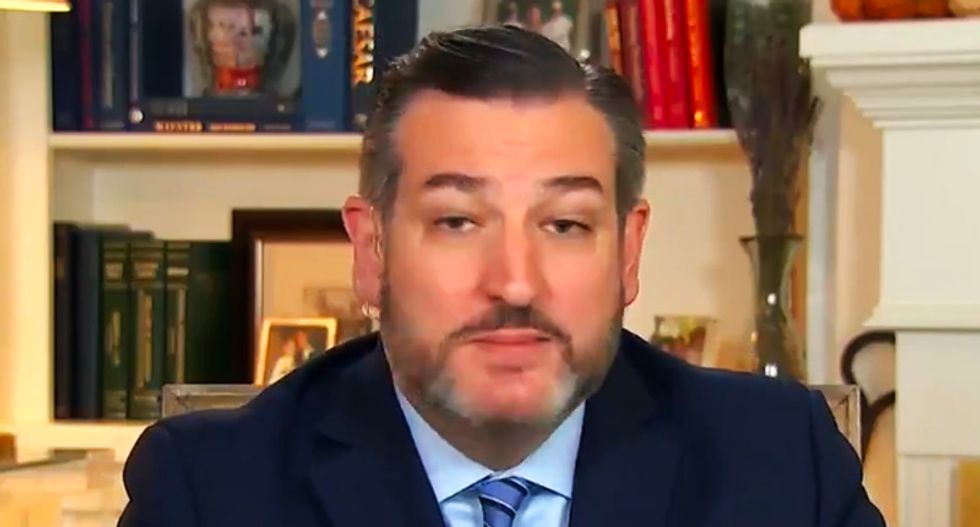 In a column for the Washington Post, conservative columnist Jennifer Rubin in publically shamed Sen. Ted Cruz (R-TX) for his conversion from Cold War Russia critic to unabashed "Putin stooge" after his performance on "Meet the Press" on Sunday.

Speaking with NBC host Chuck Todd on Sunday, Cruz attempted to push what has been described as Kremlin propaganda, asserting that "there is evidence of Ukraine interference in our election because an op-ed was written criticizing Trump’s campaign rhetoric about Ukraine."

Delving into Cruz's recent past, Rubin wrote, "Sen. Ted Cruz (R-Tex.) has spent his entire adult life touting the West’s defeat of communism in the Cold War. In July 2014, he declared to a young conservative group, 'Mr. Putin, give back Crimea.’ Why is it so unimaginable for President Obama to utter those words?'"

"Cruz and other Republicans, in particular President Trump, have been lying about Obama’s stance on Ukraine for a long time," Rubin explained. "One can argue, as I did at the time, that Obama’s response should have been stronger, but he was no apologist for Russia. In that regard, Obama cannot hold a candle to Trump, who in the 2016 regurgitated Russian talking points that 'the people of Crimea, from what I’ve heard, would rather be with Russia than where they were.'"

With that she turned her focus to Cruz's NBC comments.

"And as for Cruz, Cold Warrior, Obama critic and anti-Putin hawk, he now declares there is evidence of Ukraine interference in our election because an op-ed was written criticizing Trump’s campaign rhetoric about Ukraine. This is what Cruz is not reduced to — making excuses for a president willing to stab Ukraine in the back to the utter delight of Putin," she wrote. "Putin would like nothing better than to alleviate Russia’s sole responsibility for the 2016 attack on our election, the surreptitious plan detailed in the Mueller report to throw the election Trump’s way. Raising doubt that others’ were responsible, as well — and we aren’t punishing them? — is straight out of the Kremlin propaganda playbook. And Ted Cruz is willing to help Trump and Putin do just that."

Rubin then lambasted the Republican Party -- that she notably abandoned since Donald Trump became President, writing, " Cruz, like virtually every other Republican in Congress is a coward, is afraid of a tweet or of the Trump mob. The formerly tough-on-defense Republican Party would rather contribute to the Kremlin propaganda machine and enable Trump (Putin’s best friend) than incur the wrath of the right wing."

"The words of a U.S. president and a U.S. senator matter, and one of the saddest things is that both are willing to enable an enemy of the United States, she lamented.