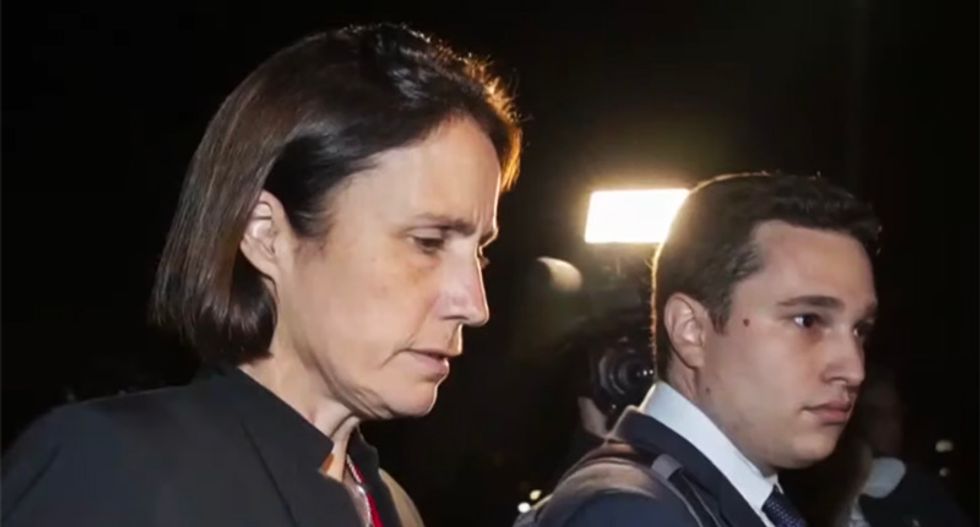 As part of a report on the dysfunction within the White House since a whistleblower reported that Donald Trump attempted to exchange military aid for dirt on political opponents from the president of Ukraine, the Washington Post notes that Russia and Vladimir Putin expert Fiona Hill ran into a buzzsaw of opposition weeks after taking at a job in the administration.

With the president facing ouster after being impeached by the Democratic-controlled House that is expected to move to the Senate for trial, the Post reports, "The jarring developments over the past three months have also exposed the extent to which the national security establishment, and the values that have traditionally guided American foreign policy, are facing an extraordinary trial of their own under Trump’s presidency."

"The fallout of the impeachment battle extends far beyond Trump’s political survival in a Senate trial. Tensions, exposed by impeachment, have fed Trump’s belief that he is surrounded by disloyal subordinates and have fueled animosity among congressional Republicans toward the supposed 'deep state,'" the report continues while pointing out that some experts who took jobs with the Trump administration did so even though they disagreed with the president's policies -- and hoped to mitigate the damage in the name of national security.

In the case of Hill, who authored a book on Vladimir Putin, she was cautioned to keep her distance from the Trump White House and soon found herself being undercut and attacked within weeks of joining the administration.

"Hill, a former U.S. intelligence official and co-author of a biography of Russian President Vladi­mir Putin, was little known outside foreign policy circles when she joined the White House" the Post reports. "Within weeks of joining the administration, she faced a wave of internal and external efforts to discredit or neutralize her."

"The attacks were a continuation of an astonishing level of hostility she witnessed during the two years she served in the White House," the report notes. "Trump loyalists drafted internal “enemies” lists, co-workers were purged, and NSC security teams logged hundreds of external threats against Hill and other officials, all fueled by a steady stream of far-right smears."

In her testimony during the House impeachment inquiry that eventually led to articles of impeachment being approved, Hill admitted, "My entire first year of my tenure at the National Security Council was filled with hateful calls, conspiracy theories, which has started again”

"For months, Hill arrived at work nearly each day to find venomous messages left on her work phone by a caller from Florida. The same woman called Hill at home several times, frightening her young daughter, according to two people familiar with the matter," The Post added.